Arduino basics – How to use the potentiometer

In this post I’ll show you how to use a potentiometer. A potentiometer is a device that allows you to change the value of a resistance by turning a knob.

Let’s put this circuit together, and then we’ll discuss how it works. In particular, we’ll see what is happening inside the potentiometer.

Let’s assemble the circuit. You will need:

Here’s a photo of the assembled circuit: 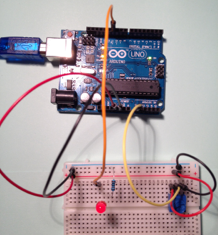 In the blog post titled “Arduino basics: The voltage divider and the light sensor“, you learned about the voltage or impedance (resistance) divider. Back then, the divider was fixed as we used two fixed resistors.

In a potentiometer, we still have these two resistors inside the package, but at least one of them is variable, that is, the resistor changes as we turn the knob. 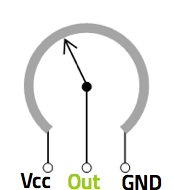 In the diagram on the right, the pin in the middle is connected to a dial that is made of conductive material, like copper. They circle represents a resistor, with its two ends connected to Vcc and GND. As the dial comes in contact with different parts of the resistor, it samples a voltage between V+ and ground, and we can read this voltage from the middle pin, labeled “Out” in the diagram.

A potentiometer is just a variable voltage divider. That takes care of the input.

But how to we get the LED to light up in proportion to the position of the potentiometer?

This is where Pulse Width Modulation, or PWM, comes in. 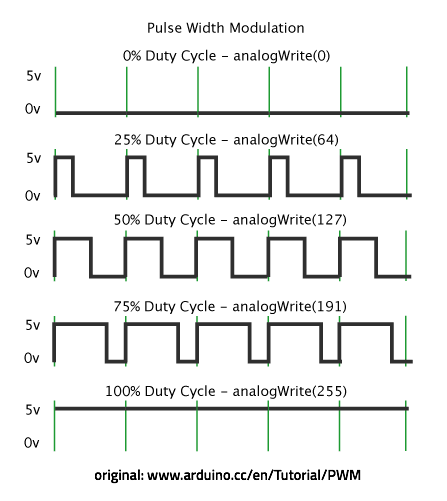 Have a look at this diagram, taken from the Arduino web site. A “normal” digital pin outputs 0V or 5V, like in the top and bottom waveform examples. But, in a pin that supports PWM, we can output 5V for only part of the period. In the second waveform, for example, we output 5V for 25% of the period, and 0V for the rest. In the third example, its 50% and 50% respectively.

Here’s the sketch that drives this circuit

There is nothing new here. We have seen the “map” function in an earlier lecture, so you know that this function is used when we want to make a range of values fit within another range of values. In this case, we read values in the range of 0 to 1023 from analog pin 0, and we want to make this fit in the range 0 to 255, which is what the pulse width modulation-capable pin 11 can output.

Here’s an experiment: Take a small speaker and connect it to the breadboard so that it replaces the LED. Fire up the circuit. Can you hear the sound coming out of it? Can you notice how its pitch changes as you turn the knob?

In this Maker Mind Meld Summit presentation, Jordan Christman explains how FPGAs work, and how you can use them in your projects END_OF_DOCUMENT_TOKEN_TO_BE_REPLACED

In this Maker Mind Meld summit presentation, Dal Gemmell talks about a new generation of wireless networks, based on cutting-edge blockchain technology, END_OF_DOCUMENT_TOKEN_TO_BE_REPLACED

Happy New Year! The turn of a year is an opportunity to reflect (look back) and plan (look forward). 2022 was another END_OF_DOCUMENT_TOKEN_TO_BE_REPLACED

This post is my latest Hack on apptime.app. It draws from one of the chapters in my book, Maker Education Revolution. See END_OF_DOCUMENT_TOKEN_TO_BE_REPLACED

We have just published a new Tech Explorations podcast episode. In this episode, I talk with David Beamonte, Arduino’s Cloud product manager. END_OF_DOCUMENT_TOKEN_TO_BE_REPLACED

I got my first Raspberry Pi in 2012 when this single-board computer made its debut. In the following years, I purchased all END_OF_DOCUMENT_TOKEN_TO_BE_REPLACED

In this Maker Mind Meld Summit presentation, Jordan Christman explains how FPGAs work, and how you can use them in your projects alongside a microcontroller and microprocessor. FPGAs is a fascinating topic because it entails END_OF_DOCUMENT_TOKEN_TO_BE_REPLACED

In this Maker Mind Meld summit presentation, Dal Gemmell talks about a new generation of wireless networks, based on cutting-edge blockchain technology, that delivers a new kind of open, decentralized wireless network built by individuals END_OF_DOCUMENT_TOKEN_TO_BE_REPLACED