Dealing with false triggers from a PIR sensor

The PIR sensor is very sensitive and is known to be creating false triggers, i.e. it will occasionally go LOW to indicate that there is no movement, even though there is movement.

There are two things you can do to create a more reliable detection system (and this can deliver the functionality you are asking for). 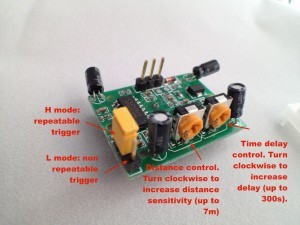 Notice that there are two orange knobs on one side of the sensor. Have a look at this picture where I am marking the role of each knob.

The one on the left is for distance. Turn it clockwise to make it possible to detect movement up to 7 meters away from the sensor. I tend to keep this turned almost all the way anticlockwise since all my experiment are short distance.

The one on the right is for the dwell time. Turn it clockwise to decrease this time, meaning that for the device to trigger, a longer movement is required. I keep this turned all the way anticlock-wise, producing a very sensitive signal, and manage erroneous trigger in the sketch.

There is also a jumper that controls the trigger mode. Make sure you have this in H-mode (see picture). In H-mode, the sensor will trigger repeatedly when it “thinks” that there is movement.

2. Add some logic to the sketch to help deal with the imperfections of the sensor.

In this example (heavily borrowing from a sketch I found in the Arduino playground), I define a cutoff time. Any LOW triggers from the sensor within this cut-off time are ignored as false and the Arduino continues to think that there is movement. Have a look at it (but get a copy from Github if you want to try it out):

In this Maker Mind Meld Summit presentation, Jordan Christman explains how FPGAs work, and how you can use them in your projects END_OF_DOCUMENT_TOKEN_TO_BE_REPLACED

In this Maker Mind Meld summit presentation, Dal Gemmell talks about a new generation of wireless networks, based on cutting-edge blockchain technology, END_OF_DOCUMENT_TOKEN_TO_BE_REPLACED

Happy New Year! The turn of a year is an opportunity to reflect (look back) and plan (look forward). 2022 was another END_OF_DOCUMENT_TOKEN_TO_BE_REPLACED

This post is my latest Hack on apptime.app. It draws from one of the chapters in my book, Maker Education Revolution. See END_OF_DOCUMENT_TOKEN_TO_BE_REPLACED

We have just published a new Tech Explorations podcast episode. In this episode, I talk with David Beamonte, Arduino’s Cloud product manager. END_OF_DOCUMENT_TOKEN_TO_BE_REPLACED

I got my first Raspberry Pi in 2012 when this single-board computer made its debut. In the following years, I purchased all END_OF_DOCUMENT_TOKEN_TO_BE_REPLACED

In this Maker Mind Meld Summit presentation, Jordan Christman explains how FPGAs work, and how you can use them in your projects alongside a microcontroller and microprocessor. FPGAs is a fascinating topic because it entails END_OF_DOCUMENT_TOKEN_TO_BE_REPLACED

In this Maker Mind Meld summit presentation, Dal Gemmell talks about a new generation of wireless networks, based on cutting-edge blockchain technology, that delivers a new kind of open, decentralized wireless network built by individuals END_OF_DOCUMENT_TOKEN_TO_BE_REPLACED