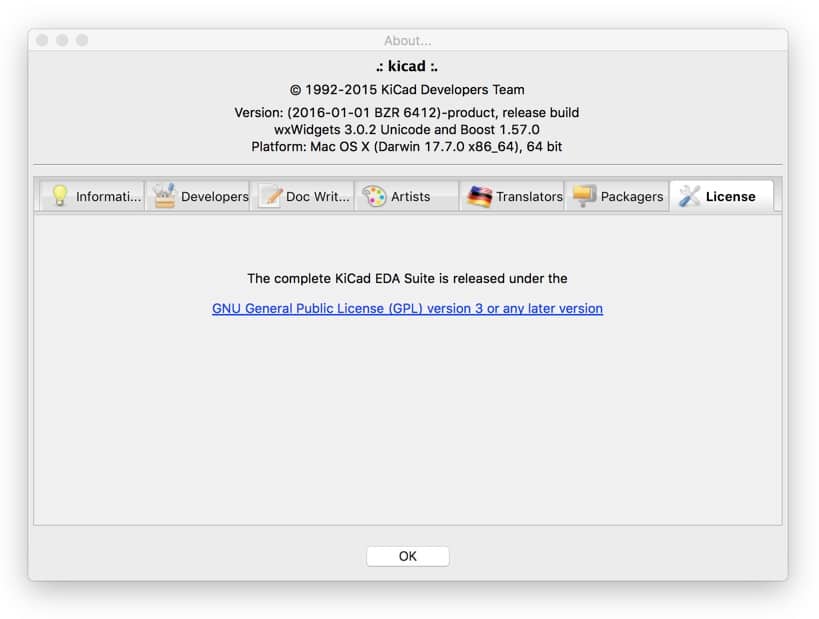 The ebook version (in PDF, epub and mobi formats) is available now at the Tech Explorations bookstore.

You can find detailed information about this book here.

Since Kicad first appeared in the PCB CAD world in 1992, it has gone through 5 major versions and evolved into a serious alternative to commercial alternatives. Once thought clunky and barely usable, it is now a solid, reliable CAD application. While it is true that Kicad is still behind its commercial competitors in specific areas, I believe that the benefits we get from truly free (“free” as “free and open source” ) software are worth the trade-off in polish and finish.

One of those benefits is Kicad’s very active and growing community of users and contributors. Kicad has a dedicated developer team, supported by contributing organizations such as CERN, the Raspberry Pi Foundation, Arduino LLC and Digit-Key Electronics. The community is also active in contributing funds to cover development costs. A fund-raising campaign covered the requested amount by 160%, ensuring 600 hours of development towards Kicad version 6. These, alone, to a large extent guarantee that Kicad’s development will accelerate, and will continue into the future.

Apart from the core team, are the people that make the Kicad community. These people support the Kicad project in various ways: writing code, sharing libraries, helping others to learn. Over the last 5 years, I have seen an explosion of interest in Kicad. As a consequence, the Internet is flooded with relevant resources: guides, tutorials, libraries, scripts. Manufacturers have also taken notice. Many of them now publish tutorials, explaining how to order your boards. Some have even made it possible to do so by uploading a single file from your Kicad project instead of having to generate multiple Gerber files, prone to make simple errors because of the multiple export options of this process.

Why do I use Kicad? I’m glad you asked. First, let’s look at my background. I am an electrical engineer with a background in electronics and computer engineering. Above all, I am an educator and electronics hobbyist. The majority of my PCB projects eventually find themselves in my books and courses. My projects are very similar to those of other hobbyists, in terms of complexity and size. I make things for my Arduino and Raspberry Pi courses. It could be an Arduino clone, or shield, a Raspberry Pi HAT, or a stand-alone relay board, power supply or motor controller. Nothing I would brag about. As a hobbyist, Kicad proved to be the perfect tool.
But I do plan to design bigger and more complex boards. And this is why I decided not to use another excellent tool, Fritzing. In Kicad, I saw a lot of benefits, without any show-stopping problems. I will list and briefly discuss my top ten Kicad benefits here.

Kicad is Open Source. To me, this is very important, especially as I find myself spending more time creating new and more complicated boards. Open Source, by nature, means that the code base of the application is available to anyone to download and compile on their computer. It is why technologies such as Linux, Apache, and WordPress essentially run the Internet (all of them Open Source). While I am not extreme in my choices between Open Source and closed source software, whenever a no-brainer Open Source option does appear, like Kicad, I take it.

It is free! This is particularly important for hobbyists. CAD tools can be expensive. Without a revenue resulting from the hobby capable of supporting the licensing fees, it is hard to justify hundreds of dollars spent, especially when there are viable alternatives. Which brings me to Benefit 3…

Kicad is unlimited. There are no “standard,” “premium” and “platinum” versions from which to choose. It’s just a download, and you get everything. While there are many free commercial PCB tools, there are always restrictions on things how many layers and how big your board can be, what can you do with your board once you have it, who can manufacture your board, and much more. I’ll say again: Kicad is unlimited! This is so important that I choose to pay a yearly donation to CERN that is more than the cost of an Autodesk Eagle license to do my part in helping maintain this.

Kicad has awesome features. Features such as interactive routing, length matching, and differential routing are professional-grade. While you may not need to use some of them right away, you will use them eventually. Features that are not included “in the box” can be added through third-party add-ons, one of the benefits of Open Source. The autorouter is one example. The ability to automate workflows and extend capabilities through Python scripts is another.

Kicad is continually improved. Especially since CERN became involved in the Kicad project, I have seen a very aggressive and successfully implemented roadmap. At the time of writing this, Kicad 5 is about one month old (the Kicad team released it in early August 2018). The funding for Kicad 6 is complete, and the roadmap living document published. When I look at this roadmap, I get very excited: an improved and modernized user interface, improvements in the schematic editor and the electrical rules checker (hopefully, with better error messages), better net highlighting, and much more, are in the works right now.

Kicad’s clear separation of schematic and layout is a bonus to learning and using it. Users of other PCB applications often find this confusing, but I believe that it is an advantage. Schematic design and layout design are truly two different things. You can use them independently. I often create schematic diagrams for my courses that I have no intention in converting into PCBs. I also often create multiple versions of a board, using the same schematic. This separation of roles makes both scenarios easy.

I can make my boards anywhere: I can upload my project to any online fabricator that accepts the industry-standard Gerber files; I can upload it to an increasing number of fabricators that accept the native Kicad layout file; and, of course, I can make them at home using an etching kit (I do not cover this option in this book).

Kicad works anywhere. Whether you are a Mac, Windows or Linux person, you can use Kicad. I use it on all three platforms. With the coming of Kicad 5, interoperability is better than ever before.

Kicad is very configurable. You can assign your favorite keyboard hotkeys and mapping, and together with the mouse customizations, you can fully adapt it to your preferences.

If you are interested in creating analog circuits, you will be happy to know that Kicad now has integration with SPICE. You can draw the schematic in Eeschema, and then simulate it in SPICE, without leaving Kicad. When I need to simulate an analog circuit, I usually use iCircuit, an excellent desktop app. But I do plan to explore and start using Kicad and Spice for this kind of work.

These are the ten most important reasons for which I have chosen Kicad as my tool of choice for designing PCBs. These reasons might not be right for you, but I hope that you will consider reading this book first before you make your own decision.

In this book, I have packed almost everything I have learned as a Kicad user over the last four years. I have organized it in a way that will make learning Kicad quick. The objective of this book is to make you productive by the time you complete the first project, in Part 4.

If you come from another PCB CAD tool and you are already experienced in designing PCBs, I only ask that you have an open mind. Kicad is most certainly very different to the tool to which you are accustomed. It looks different, and it behaves differently. It will be easier to learn it if you consciously put aside your expectations, and look at Kicad as a beginner. As per the Borg in Star Trek, “resistance is futile,” and in learning, like in so many other aspects of life, you are better off if you go with the flow.

In this Maker Mind Meld summit presentation, Dal Gemmell talks about a new generation of wireless networks, based on cutting-edge blockchain technology, END_OF_DOCUMENT_TOKEN_TO_BE_REPLACED

Happy New Year! The turn of a year is an opportunity to reflect (look back) and plan (look forward). 2022 was another END_OF_DOCUMENT_TOKEN_TO_BE_REPLACED

This post is my latest Hack on apptime.app. It draws from one of the chapters in my book, Maker Education Revolution. See END_OF_DOCUMENT_TOKEN_TO_BE_REPLACED

We have just published a new Tech Explorations podcast episode. In this episode, I talk with David Beamonte, Arduino’s Cloud product manager. END_OF_DOCUMENT_TOKEN_TO_BE_REPLACED

I got my first Raspberry Pi in 2012 when this single-board computer made its debut. In the following years, I purchased all END_OF_DOCUMENT_TOKEN_TO_BE_REPLACED

Our new course, Raspberry Pi Full Stack Upgrade Project, is now published! See our Black Friday offer at the bottom of this END_OF_DOCUMENT_TOKEN_TO_BE_REPLACED

In this Maker Mind Meld summit presentation, Dal Gemmell talks about a new generation of wireless networks, based on cutting-edge blockchain technology, that delivers a new kind of open, decentralized wireless network built by individuals END_OF_DOCUMENT_TOKEN_TO_BE_REPLACED

Happy New Year! The turn of a year is an opportunity to reflect (look back) and plan (look forward). 2022 was another challenging year in many respects, and 2023 will be no less challenging. However, END_OF_DOCUMENT_TOKEN_TO_BE_REPLACED