This is the first lesson in the Arduino User Input devices. You will learn which devices work as inputs for the Arduino, how to connect and use them.

A button is a simple on-off switch. There are many kinds of buttons, distinguished by the mechanism used to close or open a circuit, but essentially all buttons belong to one of two families: those that keep the connection in either an open or a closed state, and those that return to their original (default) state.

Here are some examples of switches.

Clock-wise from the top: 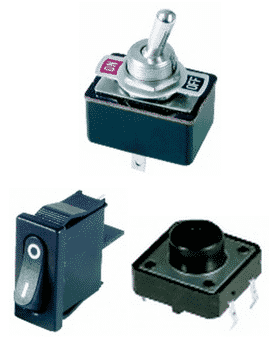 A keyboard key or a door bell button are both momentary buttons. Momentary buttons are also known as "biased" because they have a tendency to return to their original position. A light switch, on the other hand, stays at the position it was pushed to, so it is often called "un-biased".

Let's create a simple circuit to demonstrate a button.

We don't really need the Arduino for this. A battery, an LED, a resistor and the button itself would suffice.

But, using the Arduino is simple enough, and it's already got an LED in pin 13 we can use anyway, and no need to worry about a battery pack.

Plus, we can use the monitor to actually see a message when the button is pressed.

So, we'll setup this circuit (below).

Once assembled, the project will look like this (below as well): 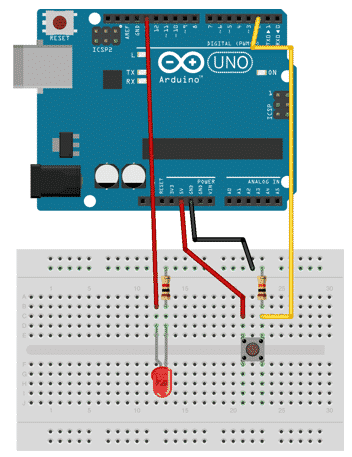 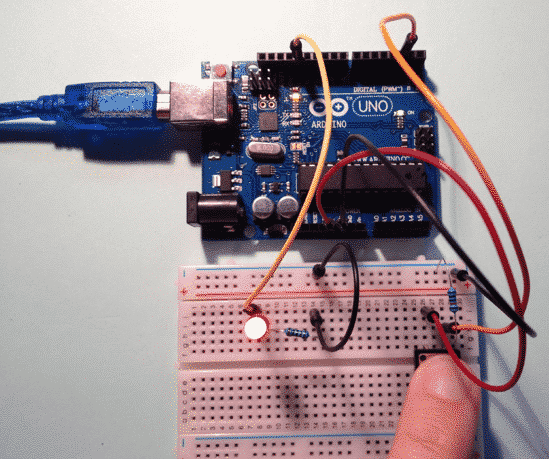 Our circuit in action!

The sketch is simply taking a reading from digital pin 2, where one of the pins of the button is connected, and writing a value to digital pin 13, where the LED is connected.

I could have written this script to be even smaller, but I will leave that for you to do as an exercise.

And that's how you can use a momentary button with the Arduino!

Lesson 1: What is the Arduino?

Lesson 3: Types of hardware that you can connect to an Arduino board

Lesson 5: Arduino libraries and how to install them