Arduino – A dive into the fundamentals of the blinking LED

The majority of Arduino buyers purchase an Arduino kit that contains an Arduino circuit board and a few hardware parts to test and examine. The directions that come with the kit show you how to test the parts. Many people don’t like directions, but if you struggle through the directions by pulling a little hair out of your head, almost anyone can do it. The most important part is, do you understand what you just did. If you ever want to make the Arduino do something that you want it to do, you need to understand the procedures that came with your kit. The directions are good at showing you how to hook up circuits and how to test them, but how it all works, the directions are not so good.

This is a supplement to the directions that shows how it all works. I choose the blinking LED to explain. After understanding that, a person should be able to figure out the rest of the projects. 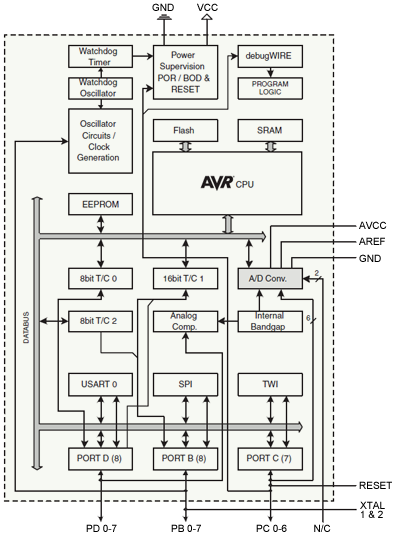 This is the block diagram for the Arduino microcontroller that is plugged into your socket of your Arduino circuit board. The purpose of this whole write up is to show you how the first project circuit works on the Arduino. That first circuit project is the blinking LED.

Instead of the Arduino testing the LED, we could test that circuit with a switch, a battery, a resistor (the resistor is used to limit current so the LED does not burn out) and a LED. We could manually turn on and turn off the switch every second and the whole circuit would be tested. We could build a computer system that could do the same thing. That computer system would contain very few parts and the software would be very small. That computer system could be explained in 5 minutes. Computers were originally designed to do many hundreds of different things. They are now designed to do many thousands of things. That has made the hardware and the software more complex. But the basic design of a computer is still the same and is simple. If you always keep that fact in the back of your mind, you will never be totally confused with computers.

Computers work with instructions. Each individual instruction performs a particular task. You can perform more a complicated task by combining different instructions together in unique combinations. The instructions that are put together for the arduino blinking sketch are saved in flash memory. When the blinking program is executed, the CPU removes a copy of each program instruction from flash memory and executes them one by one until it get to the end of the program. In case of the blinking LED program there is a jump back instruction that loops the software back to the start, so it can do it over and over.

A standard computer system is broken down into two parts, a CPU and a motherboard. The CPU controls the mother board with the address bus and the data bus. The CPU address buss does two things, it chooses address numbers on mother board memories and controls the decoder that turns on each motherboard circuit. Some of circuits that the motherboard decoder turns on is: the Ram, the Rom, the Display circuit, the USB circuit, the input circuit and the output circuit. The data bus is a two way bus that can send data numbers or receive data numbers. Some of the circuits and parts that are connected to the data bus are: the Ram, the USB circuit, the input circuit, the output circuit, and the Rom. Note: The address bus is an important part of a computer system, it is missing on the Arduino block diagram. I think they did this to save space.

We are now going to see how the Arduino works step by step. I am not going to hook up wires or download libraries. I am assuming that you already know how to do that. Almost all the concepts and principles that apply to the blinking LED, will also apply to the other sketches.

This is what happens when you up load the blinking sketch.

Before explaining how the blinking code works on the Arduino a few assumptions need to be made. Most of the programming code that is needed for the blinking LED is not shown on the arduino sketch. It could take years to understand all the code that goes into making the LED blink. Software today is not written for one purpose only. If your computer software was designed to only turn on one LED, the software would be very small. The software today is designed to do many different projects. There is common software that every project uses. An example of that is input and output. There is no reason to write new input and output software when it has been done thousands of times before by other people. Don’t write your own, use the standard input and output library. You might need to modify it a little by defining an output pin, but that is easy. When programmers are working on a new project they will always try to use a combination of many different software programs that have already been made.

When a line of C code has a “;” symbol on the end, it is a statement. A statement can be a combination of functions, parameters, integers and C code.

Here is the sketch code for the blinking LED program on the Arduino.

I will now explain how every part of the code works.

The first line starts with – “int led = 9;”. Int is a number without a fraction. Led is the name of a variable that is defined anywhere in your sketch. 9 is what is stored in that variable. Arduino’s SRAM is used to store variables. You can change the value of a variable in S Ram at any time you want in your program.

The next software routine function is the delay function- “delay(1000);”. That routine down counts a hardware counter in the microcontroller so the LED will stay on for one second. The code symbol “;” ends that statement.

Next, the “digitalWrite” function starts again. The 2 sub functions of “digitalWrite” are – “LED” and “LOW” – they select pin 9 of the Arduino to output a low. That low turns off your LED. C code symbol “;” ends that statement.

The delay function is accessed again – “delay(1000)”. That routine leaves the LED off for one second. C symbol “;” ends that statement.

In this Maker Mind Meld Summit presentation, Jordan Christman explains how FPGAs work, and how you can use them in your projects END_OF_DOCUMENT_TOKEN_TO_BE_REPLACED

In this Maker Mind Meld summit presentation, Dal Gemmell talks about a new generation of wireless networks, based on cutting-edge blockchain technology, END_OF_DOCUMENT_TOKEN_TO_BE_REPLACED

Happy New Year! The turn of a year is an opportunity to reflect (look back) and plan (look forward). 2022 was another END_OF_DOCUMENT_TOKEN_TO_BE_REPLACED

This post is my latest Hack on apptime.app. It draws from one of the chapters in my book, Maker Education Revolution. See END_OF_DOCUMENT_TOKEN_TO_BE_REPLACED

We have just published a new Tech Explorations podcast episode. In this episode, I talk with David Beamonte, Arduino’s Cloud product manager. END_OF_DOCUMENT_TOKEN_TO_BE_REPLACED

I got my first Raspberry Pi in 2012 when this single-board computer made its debut. In the following years, I purchased all END_OF_DOCUMENT_TOKEN_TO_BE_REPLACED

In this Maker Mind Meld Summit presentation, Jordan Christman explains how FPGAs work, and how you can use them in your projects alongside a microcontroller and microprocessor. FPGAs is a fascinating topic because it entails END_OF_DOCUMENT_TOKEN_TO_BE_REPLACED

In this Maker Mind Meld summit presentation, Dal Gemmell talks about a new generation of wireless networks, based on cutting-edge blockchain technology, that delivers a new kind of open, decentralized wireless network built by individuals END_OF_DOCUMENT_TOKEN_TO_BE_REPLACED