What are pull-up and pull down resistors?

We have published a comprehensive update to ESP32 For Busy People. This course was END_OF_DOCUMENT_TOKEN_TO_BE_REPLACED

MicroPython with the ESP32 – Course updated

In this episode of the Tech Explorations Podcast, I talk to Daniel Cao, co-founder END_OF_DOCUMENT_TOKEN_TO_BE_REPLACED

I am excited to announce the publication of our latest course, “Arduino IoT Cloud END_OF_DOCUMENT_TOKEN_TO_BE_REPLACED

A question I get asked frequently by people new to circuit design is about pull-up and pull down resistors.

What is the purpose of a pull-up or pull down resistor, and how does it work?

I’ll try to answer this question here as simply as I can. When I think about this, it really is simple.

Imagine that you have a switch. One pin is connected to a 5V source, and the other to a logic circuit. A logic circuit is a component that expects certain values only at its pins, usually HIGH or LOW, and it doesn’t really work well with anything else. An example could be an ATMega micro-controller, like the one you find in an Arduino board.

This looks fine, the switch is closed and the input of the logic circuit is directly connected to Vin, so it is HIGH. No problem! What if we open the switch?

Well, now there is a problem. The input of the logic circuit is not connected to anything with a specific value, it’s just hanging there. Another term people often use for this kind of situation is “floating”.

Let’s repeat: the problem here is that the input of the logic circuit is not connected to a source of defined value, and logic circuits really don’t like this!

So how do we fix it? Have a look at the next schematic: 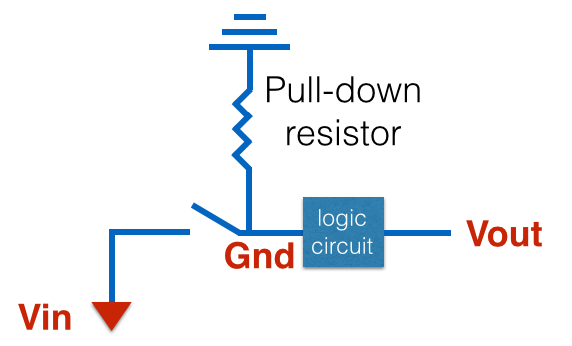 We fix this by using a large resistor (say, 10kΩ or larger) to connect the input of the logic circuit to ground. When the switch is open, instead of the input to be floating to an uncertain value, it becomes grounded, therefore LOW, through the resistor.

What if the switch closes again? Then, we’ll have this: 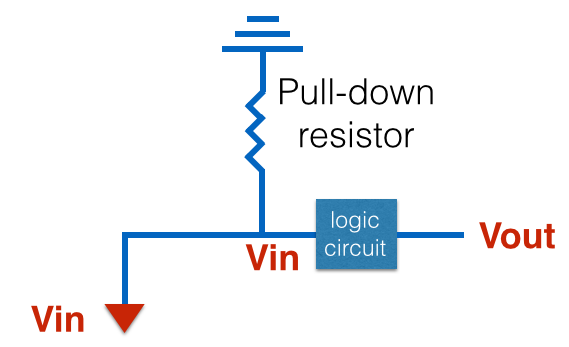 To recap, by attaching a pull-down resistor to our circuit, we ensure that the logic circuit’s input will always have a defined value, and will be happy.

You could inverse the circuit and connect the resistor to Vin instead of ground. Now, this resistor would be called “pull-up”, because it would be pulling the input of the logic circuit to Vin (HIGH) when the switch was open. 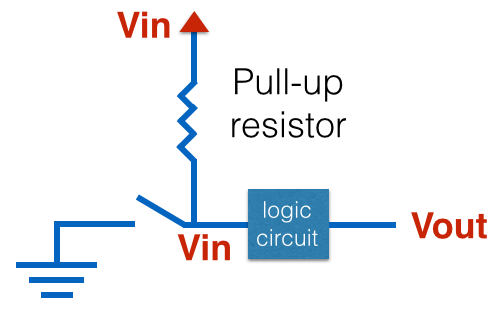