In this lesson, you will learn about the various communications capabilities of the ESP32, and specifically about communications between sensors and integrated circuits, or other devices such as mobile phones and the Internet. 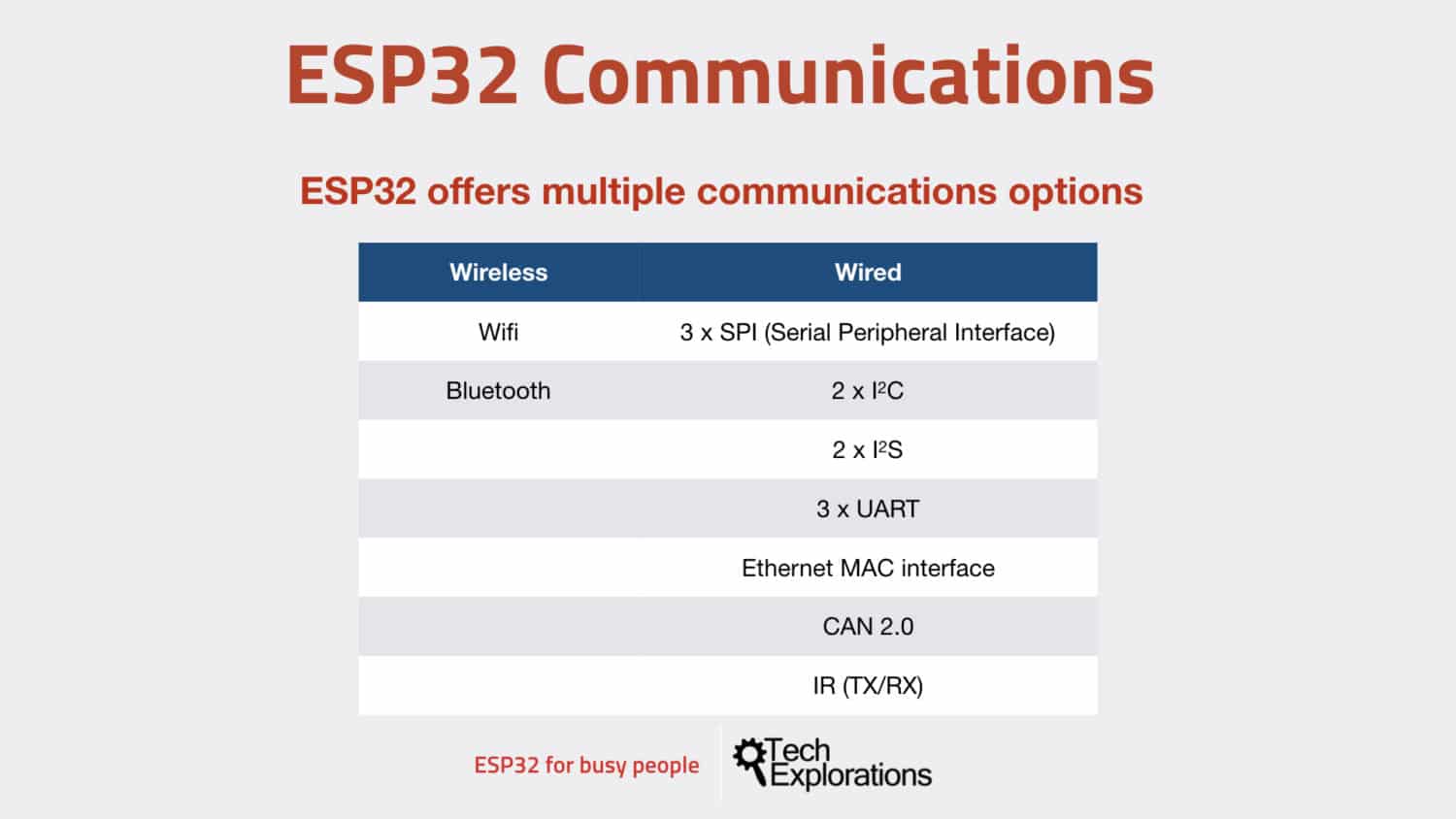 In this lesson, you will learn about the various communications capabilities of the ESP32, and specifically about communications between sensors and integrated circuits, or other devices such as mobile phones and the Internet.

How does the ESP32 communicate with its environment?

Most of the 38 pins of the ESP32 module are broken out in two rows of pins in the ESP32 dev kit, but not all of them.

A summary of the communications options of the ESP32.

On the left, you’ve got the main wireless capabilities, namely Wi-Fi and Bluetooth.

And on the right, you’ve got the wired capabilities, which allow the ESP32 to be connected to either other ESP32 and microcontrollers or smaller devices like sensors.

There are three SPI channels.

There are two I2C channels (“Inter-integrated circuit”), and two I2S, which is a lesser-known communications technology. I2S stands for “Inter IC for Sound,” and it’s an electrical serial bus, just like the I2C, but typically used for connecting digital audio devices.

We also have three serial interfaces, an Ethernet MAC interface, a CAN bus (“Controller Area Network bus”), which is typically used in vehicle applications, automotive applications, and allow microcontrollers and devices to communicate with each other in cars.

And finally, there are hardware for infrared (“IR”) serial communications.

You can see how these capabilities are laid out in the functional block diagram below. 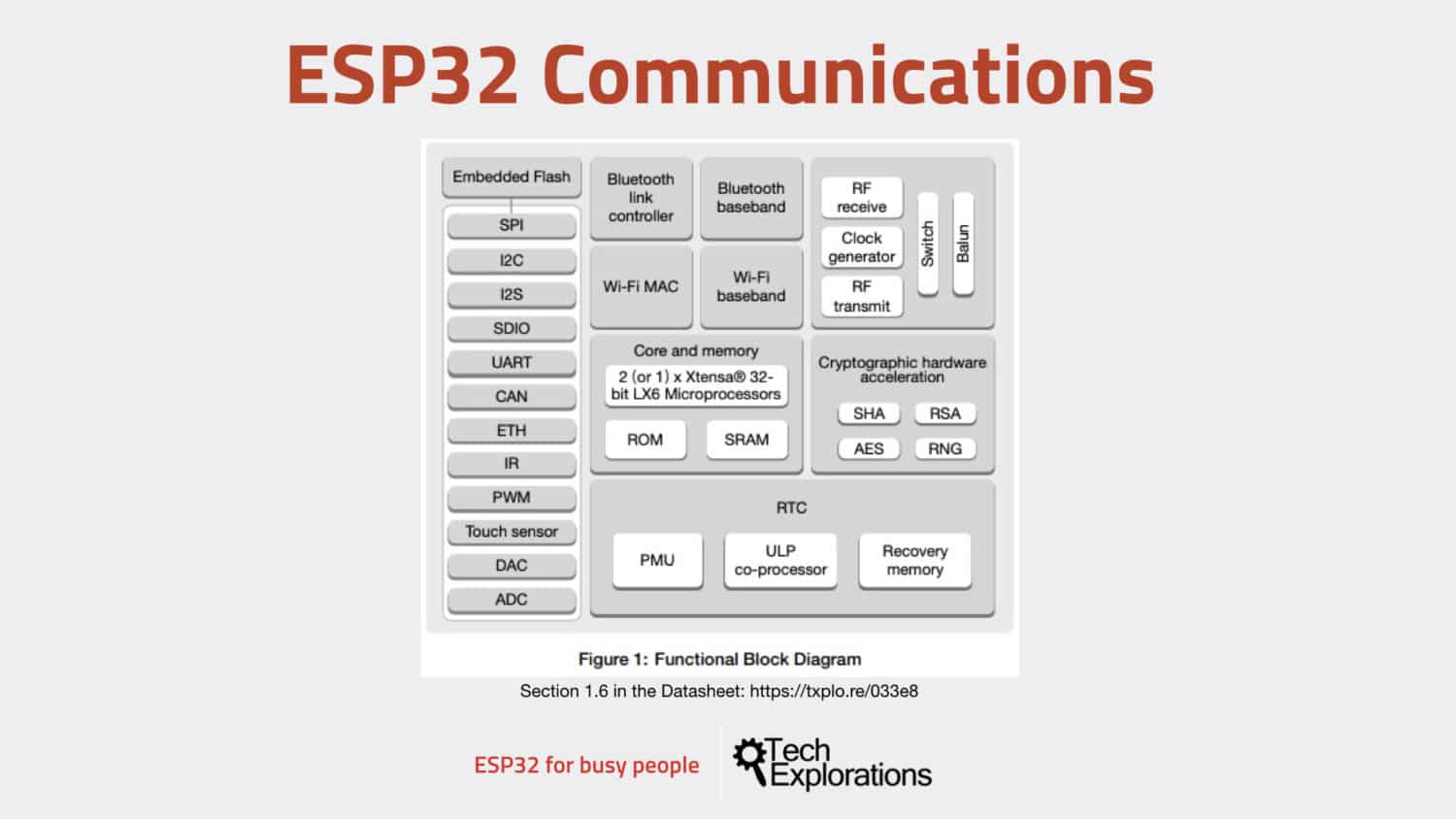 Let’s have a closer look at each one of these capabilities.

Wi-Fi is integrated into the module, and you find everything that you need to use to connect to a Wi-Fi network or to create a Wi-Fi hotspot.

There is the antenna circuit with an amplifier, various filters, and power management.

You can find more details in the datasheet in Section 3.5.

For Bluetooth, the ESP32 is compliant with classic Bluetooth 4.2, and BLE (Bluetooth Low Energy) specifications.

It contains a Class 1 2 and 3 transmitters, and it can simultaneously advertise and scan.

Again there are more details in the datasheet.

There are three SPI channels, up to 80 MHz in frequency. All of them can go up to 80 MHz.

The ESP32 contains two full I2C bus interfaces, and they can be configured to operate as a master or a slave, standard, or fast mode.

We’ll be using I2C in the video course to connect the ESP32 to things such as sensors, in particular, the BME280 and the LCD screen with the I2C backpack.

There are also two I2S interfaces, which are typically used in audio applications.

And of course, the ubiquitous UART (Universal asynchronous receiver transmitter). Three of those interfaces are present. We can use them with any serial device.

In addition to the above, there’s also the infrared receive and transmit communication capability, and an Ethernet MAC adapter so we can connect to a local ethernet network.

As you can see, the ESP32 is quite a lot of capabilities to communicate with devices, near or far away via the Internet.

And we’ll be demonstrating most of these capabilities in this course.

Now, let’s turn our attention to power. You will need to provide power to your ESP32 somehow, and in the next lesson, you will learn of three ways to do just that.

Learn more
Browse this article
How does the ESP32 communicate with its environment?
Functional block diagram