Use MOSFETs to drive large(ish) loads

MOSFET transistors are the building block of modern electronics. Between 1960 and 2018, to drive high-power electronics, 13 sextillion (1.3×1022) MOSFETs have been manufactured. Apart from using them to do calculations in CPUs, they are excellent for driving large electrical loads. 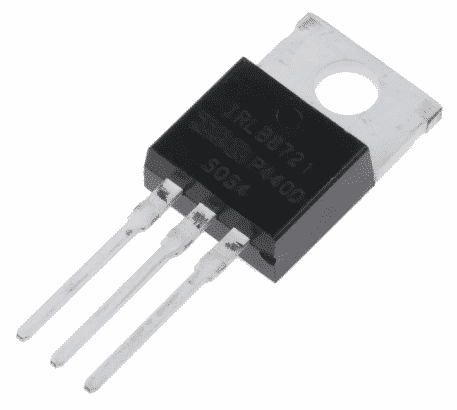 Many typical Arduino applications involve driving devices that require more power than what the Arduino itself can provide through its pins. DC motors, lights and solenoids are example devices that need lots of power to operate. This power translates to higher voltages, higher currents, or both at the same time.

In thisarticle I will discuss the MOSFET device.

What is a MOSFET

Yes: it is a type of transistor, but instead of only having three terminals, like a typical field-effect transistor (Base, Collector, Emitter) it has four: source (S), gate (G), drain (D), and body (B).

In most cases though, the B and the S are connected together (shorted) so we end up with MOSFET packages that expose only three terminals: source (S), gate (G), and drain (D).

Practically, a MOSFET has an advantage over a "normal" transistor or relay because it requires very little current to operate it (turn it on or off). Less than 1mA at the gate will do the job. This is much less to the current needed by the common field-effect transistor 2N2222 (around 5mA).

Despite the tiny control current, a MOSFET can deliver very high currents, at least 10A and up to 60A for a common device like the IRLB8721PbF.

Another advantage of a MOSFET over a relay is its switching speed. It can turn on and off within nanoseconds. The IRLB8721PbF, for example, can switch on within around 100nsecs, which makes it a great option if you want to drive a power LED or motor using pulse-width modulation.

And the really nice thing is that you can use a MOSFET almost as a drop-in replacement for a normal field-effect transistor.

Example use of a MOSFET

Here is an example of use: 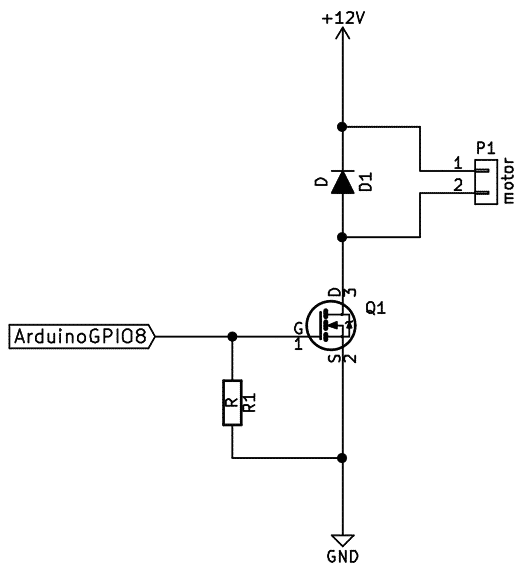 In this schematic, a MOSFET transistor is used to turn on the connected motor. Because the motor contains a coil, a diode is connected in parallel to protect from reverse voltages (see relevant article). You should use the same setup for any load that contains a coil, like a relay, solenoid or motor. If instead of a motor you used a high-power LED, you can omit the diode.

The gate of the MOSFET is connected to one of the Arduino's GPIOs. This could be a 5V or a 3.3V Arduino. There is also a pull-down resistor that connects the gate to ground. This resistor is used in the case that the transistor's source pin is "floating". This can happen, for example, if the Arduino is turn off, or the source pin is not connected to anything and therefore its voltage is undefined.

In summary, a MOSFET transistor is an excellent choice for controlling a relatively large load using 3.3V or 5V logic, such as Arduinos, and Raspberry Pis.