By the end of the lesson, you have a good understanding of what LabJack is, what are the basic features available with a LabJack device. 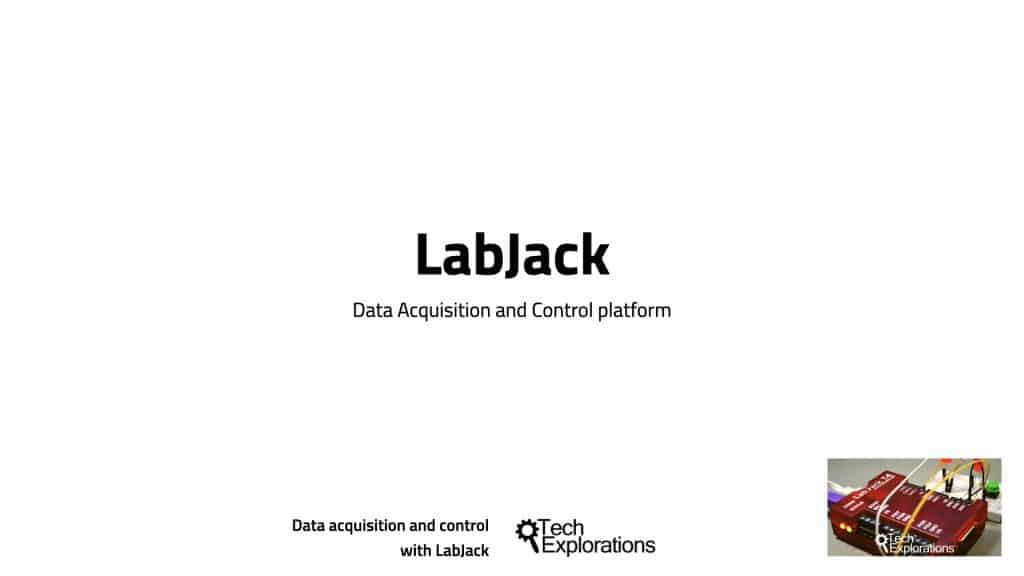 Hi, thanks for stopping by! Just letting you know that we are currently working on this page. You may notice incorrect links and lots of typos. We expect to buff and polish within a few days.

In his lecture, I'll focus on LabJack.

By the end of the lecture, you have a good understanding of what LabJack is, what are the basic features available with a LabJack device.

I'll also discuss a couple of example applications of LabJack devices in the real world and how they're used, some of the most useful LabJack features, add-on hardware used to expand its capabilities, LabJack software tools, and how to program it. 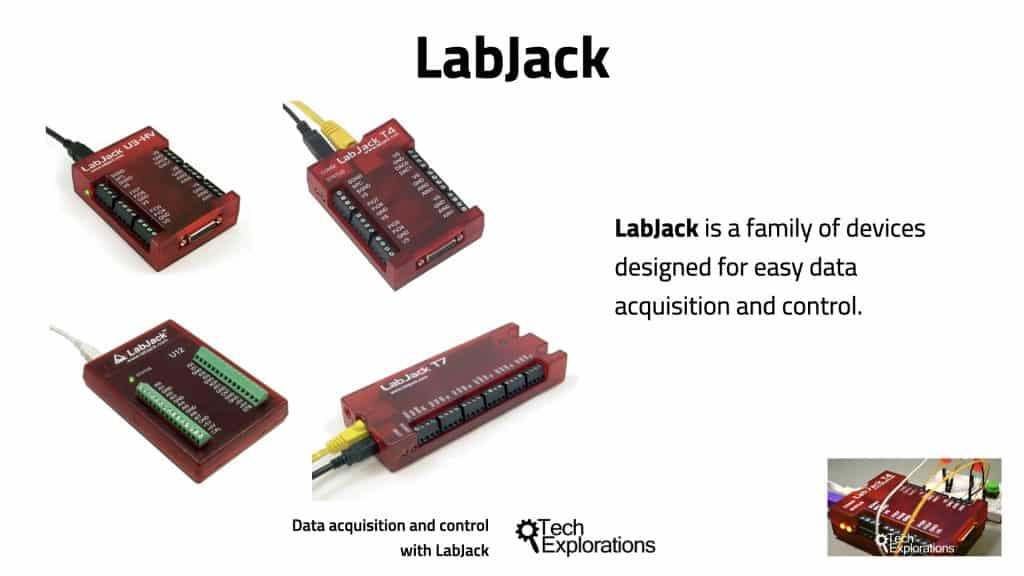 LabJack is a company that makes products designed for easy data acquisition and control. The common characteristics among all LabJack devices are the multiple multi-function input and output ports equipped with screw terminals to make it easy to connect wires and external devices.

Every LabJack can be connected to a computer via USB. In addition to USB, some LabJack devices also have Ethernet and Wi-Fi interfaces.

What is LabJack? (44-sec video by LabJack) 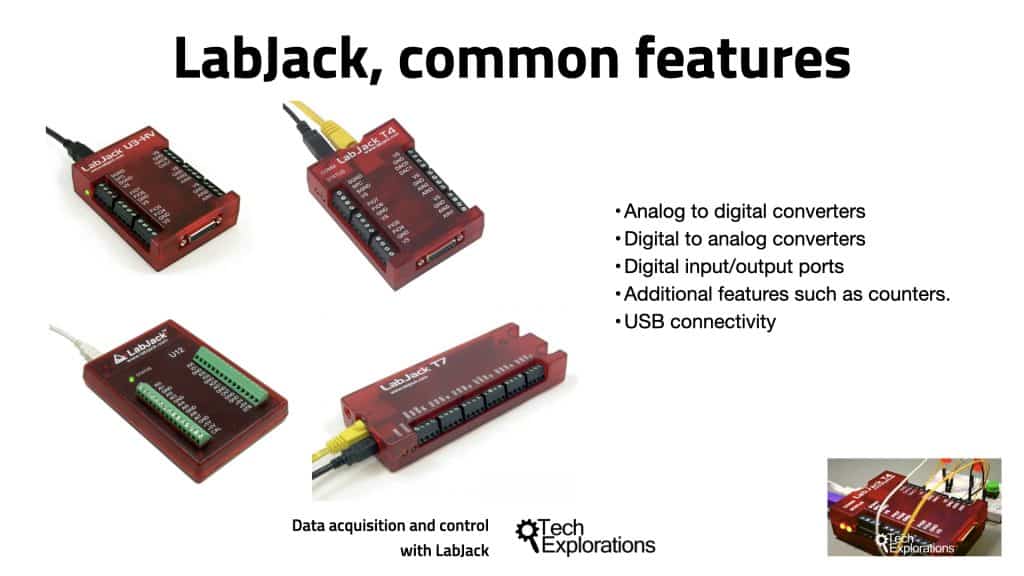 Additional features such as counters and USB connectivity to a host computer.

As I mentioned earlier, some models have Ethernet and Wi-Fi connection options so that you can integrate a LabJack into an existing network. 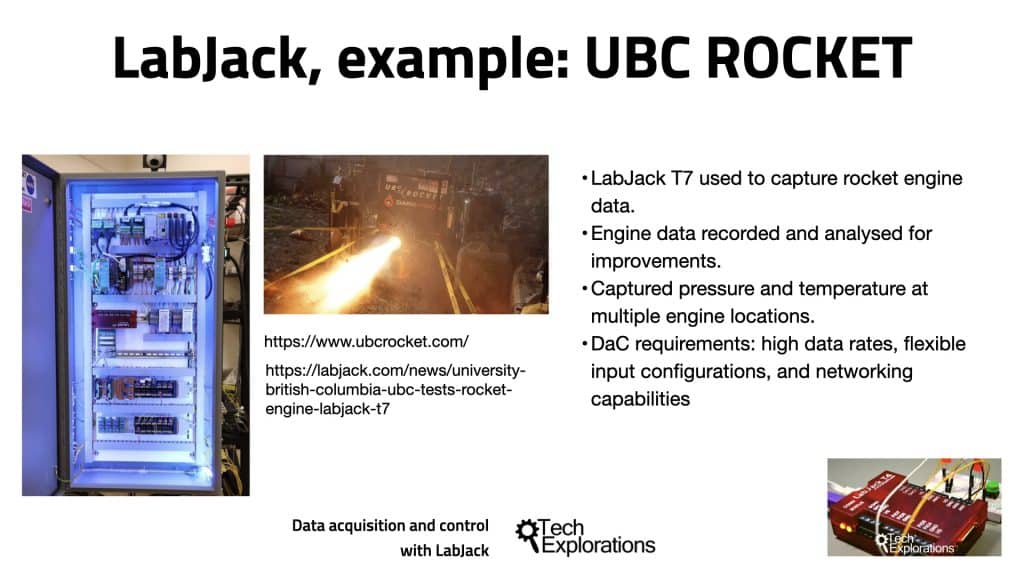 I'll come back to the topic of LabJack features later in this lecture. Next, I want to show you two examples of how LabJacks are used in the real world. Here's an example that really impressed me. A group of students from the University of British Columbia in Canada used the LabJack T7 device to capture data from a rocket liquid fuel engine.

The data were captured using the hot tests of the engine and included values for pressure, force, flow rates, and temperature. The team used many kinds of sensors to achieve this. For example, they used a load cell to measure engine thrust, pressure transducers for measuring the pressure of the liquid fuel and oxidizer, and multiple thermocouples to capture the temperature of the engine fuel and oxidizer.

The LabJack T7 was chosen because it was able to match the team's data acquisition requirements with the constraints of the budget. The requirements was high data capture rates, flexible input configurations, and network access. 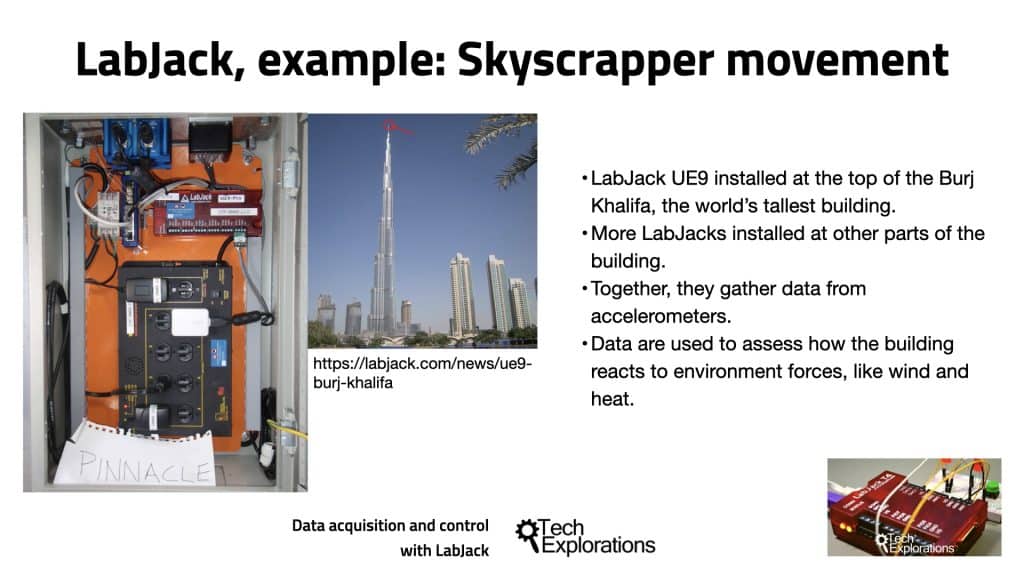 Here's another example of how LabJack devices are used in the real world. The world's tallest building is the Burj Khalifa in Dubai. The tower reaches 828 meters above ground.

Wind forces and changes in temperature during the day and night caused the building to move, vibrate, and tilt.

To monitor these reactions, structural engineers have deployed seven LabJacks from the basement to the top. These LabJacks collect data constantly and for months at a time without direct human intervention. And trigger alarms if any of the measured conditions go outside of the set parameters.

The engineers analyzed the data to understand how the building reacts to changes in the environment. There is an obvious human safety aspect to the data collected by the distributed LabJacks.

It is also interesting to note that the same model device can operate reliably from the basement of the building, where the temperatures and humidity are relatively steady to the pinnacle, where conditions can vary widely.

LabJacks in the Burj Khalifa have operated for ten years continuously showing the reliability of this technology. 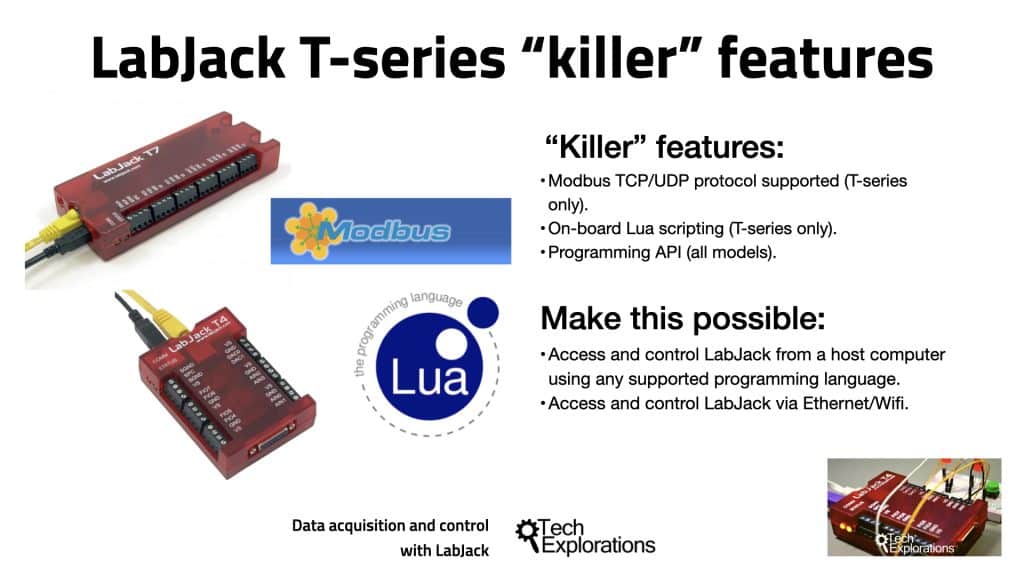 Earlier in this lesson, I discussed the features that are common between all LabJack devices. Over the years, LabJack has added new models to its lineup with enhanced capabilities over the originals. The new T-series devices include two features that I think are game changers in low cost data acquisition and control applications.

First, is the compatibility with the Modbus TCP/UDP protocol.

And second, the ability for onboard Lua scripting.

Because Modbus is available in a T-series, Ethernet and Wi-Fi connectivity was added.

Modbus is important because it makes it possible to access and control LabJack T-series devices via a network. Each LabJack device is uniquely addressed, so you can sit at your computer and access any LabJack in your network, interact with any of its ports, and configure and reconfigure as needed.

Onboard Lua scripting is important because, with it, it is possible to write Lua programs that are executed on a T4 or T7 LabJack without a need for a host computer.

With onboard Lua scripting, the LabJack can operate autonomously.

While onboard Lua scripting and Modbus support is available only in T-series LabJacks. The programing API is available across the full range. With the help of the API, you can use one of the many supported programing languages and tools to write programs that can interact with LabJack. This way, you can programmatically capture data, manipulate input/output ports, and configure the device.

Modbus and onboard Lua scripting make a third scenario possible. You can use one of many supported programing languages such as Python to write programs that run on your host computer that can interact with a Lua program that is running on the LabJack device or directly with any of its portal registers.

This means that you can write custom software to interact with LabJack and are not confined to using the programing environment provided by LabJack.

I consider Modbus and onboard Lua scripting as the killer features of the T-series devices. Along with the programing API, the LabJack provides engineers with amazing power and flexibility to integrate it into a huge variety of data acquisition and control applications. 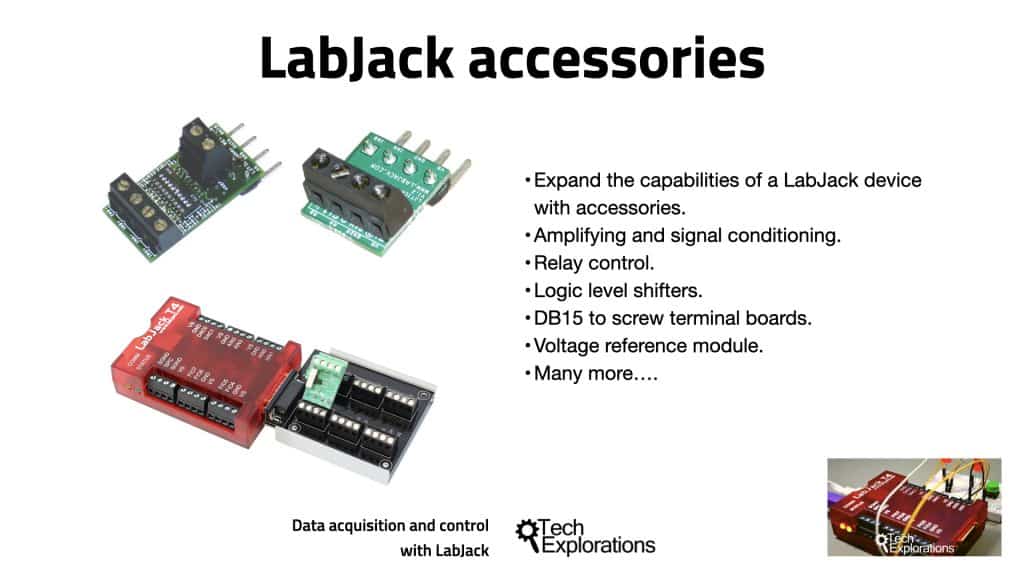 The capabilities of LabJack devices can be extended with the help of a series of signal conditioning modules, the modules are known as Ticks.

For example, to connect an analog sensor with a weak output signal to a LabJack T4, you can use a signal conditioning and amplifying module.

To control a relay or other small load, you can use a relay driver module.

The wide variety of the signal conditioning modules means that your LabJack is capable of nearly any sensor or application without having to buy new hardware. Often only a $20 to 40 tick is needed to connect an industrial sensor or actuator to a LabJack. 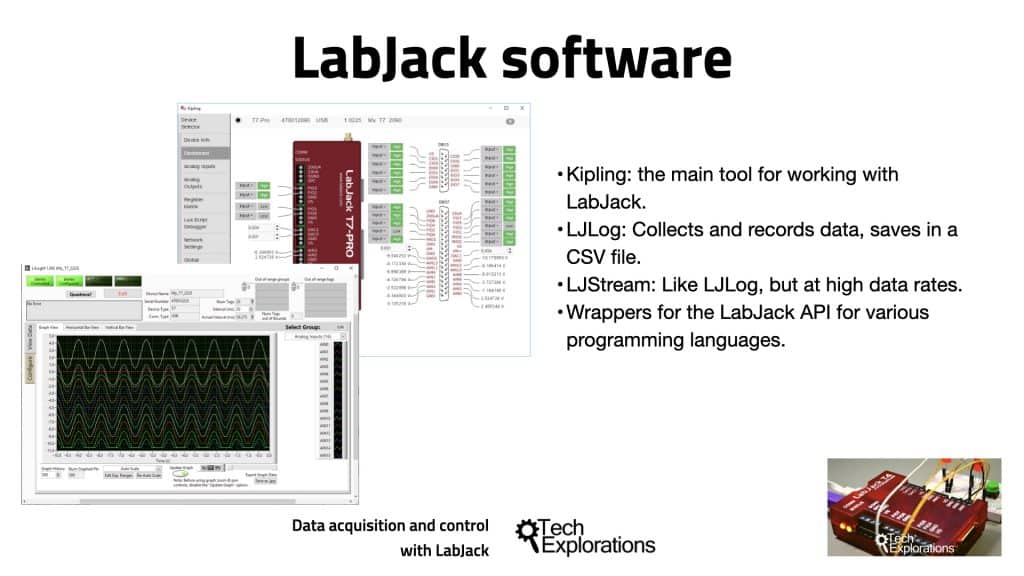 LabJack comes supported with several software applications and has support for all major programing languages.

In this course, you'll spend most of the time working with Kipling. Kipling is a tool that allows users to interact with a LabJack via USB, Ethernet, or Wi-Fi. With Kipling, you can configure, read, and write analog with digital pins, write and debug Lua programs, and upgrade firmware.

LJLogM is a graphical utility specifically designed for data logging. It can set it to read and input at specific time intervals and record the data in a CSV file full beta analysis.

There's also LJStreamM, which is similar to LJLogM but used for high input data rates, generally more than 100 hertz.

As I mentioned earlier, you can control LabJack programmatically. To make this easy, there are wrappers for many programing languages that give you access to the LabJack programing API. You can interact with LabJack using a programing language you already know, such as Python, Java, MATLAB, or Visual Basic. It can actually do everything programmatically, including configuring the device and uploading Lua scripts that run on the device. And I'll be showing you how to do this in this course.

Go to the next article in this series

With this video course, you will learn how to use the LabJack device to perform data acquisition and control (DaQ) operations.

LabJack was designed to be robust and reliable, to work autonomously in harsh environments for a long period of time, and to have a lot of input/output ports able to connect to a huge range of sensors and actuators.