In this article I'll show you some of the waveforms that you will typically see with your oscilloscope. Sine, square, triangular and step waveforms are examples of signals that we commonly see. 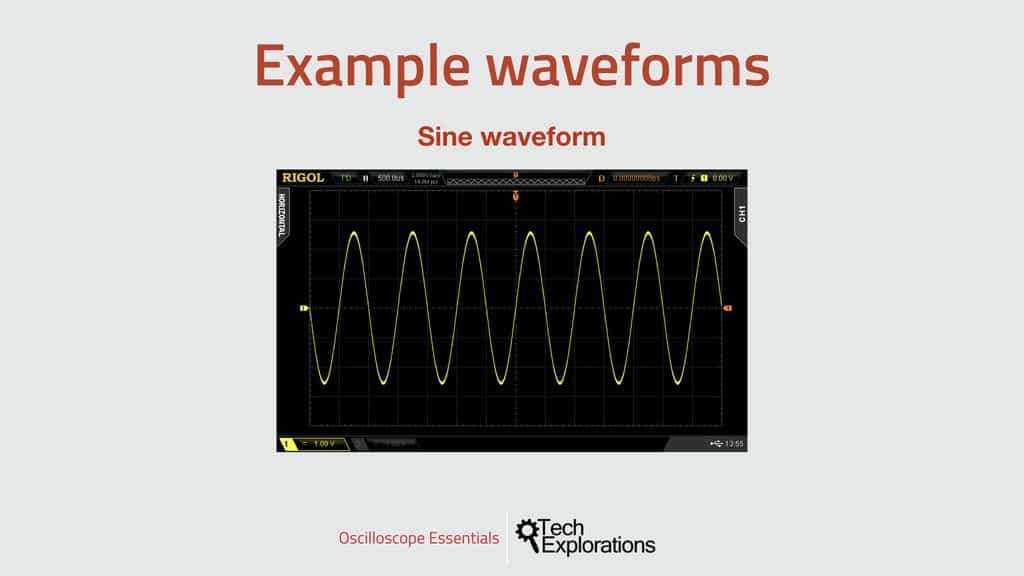 In this article I'll show you some of the waveforms that you will typically see with your oscilloscope.

There’s a few that you’ll see most often, but also some rare ones worth knowing about.

Oscilloscopes can display an infinite number of waveforms. All you have to do is to so supply it with some kind of voltage signal that changes over time, and it will display it on the screen.

However, there are certain waveforms that are regularly encountered in electronics.

Sine, square, triangular and step waveforms are examples of signals that we commonly see.

Let’s have a look at these, plus a few more.

The sine wave is one of the most common waves you’ll see in an oscilloscope.

A sine wave is one of the most common waves you’ll see in an oscilloscope. A sine wave describes a continuous and smooth periodic oscillation. In comparison, the square wave, that you’ll see next, switches from one voltage level to another very abruptly. 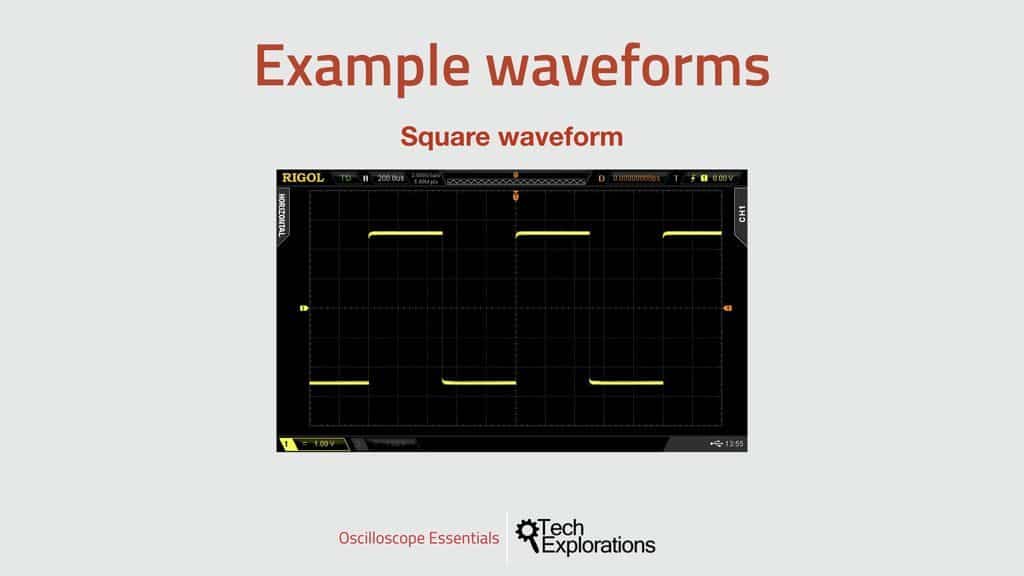 The square waveform (or is close relatives, such as the pulse), is the waveform that we work with the most

The example you are looking at is almost perfect because it was produced by a signal generator. The signal generator is a device specifically designed to create very clear signals. As you’ll see later in this course, real square waves are much noisier, but still work well for the purpose of transmitting information. 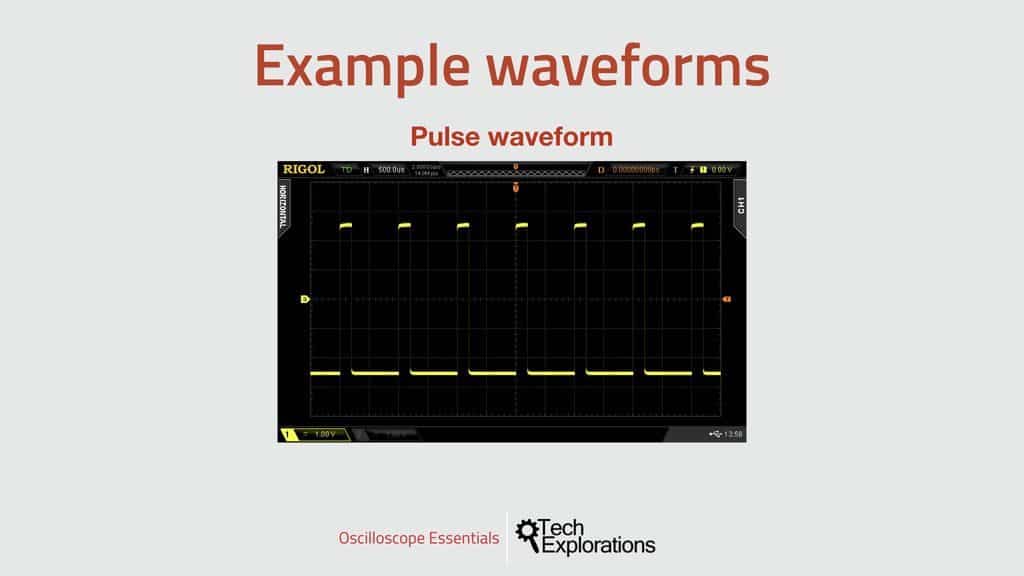 This is the pulse waveform.

This is the pulse waveform. 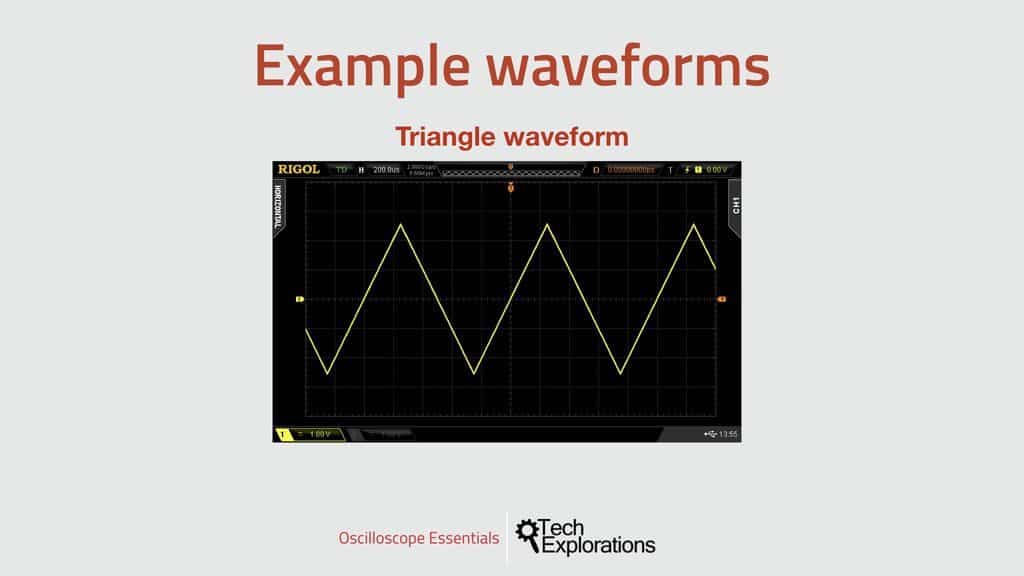 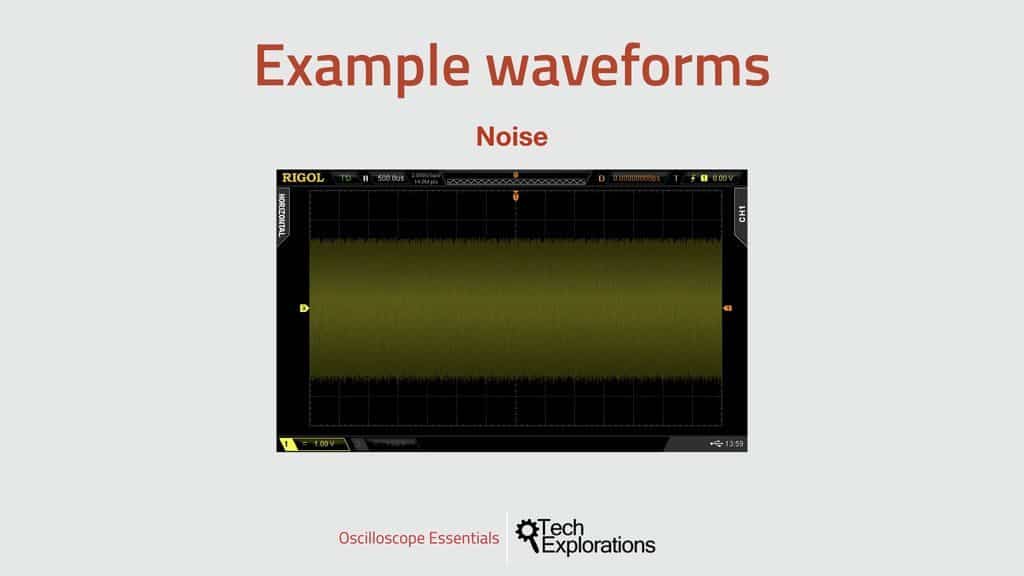 Noise (not really a wave).

You can see something like this when the probes are connected to something that is noisy, or generates noise.

But you can also see a “noisy” signal if you are trying to display a non-noisy signal where the trigger is not properly set. The trigger is an important function and concept without which you cannot effectively operate your oscilloscope. You will learn about triggers later in this course. 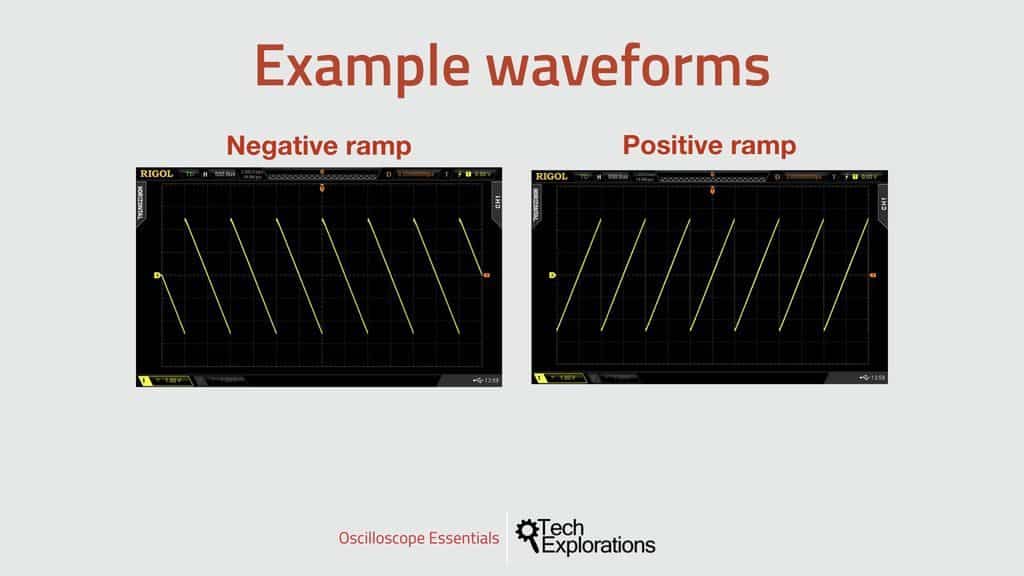 The Sawtooth (or ramp) is a relative of the triangular wave. Just remove one side of the triangle, and you get a ramp that is rising (positive) or falling (negative). 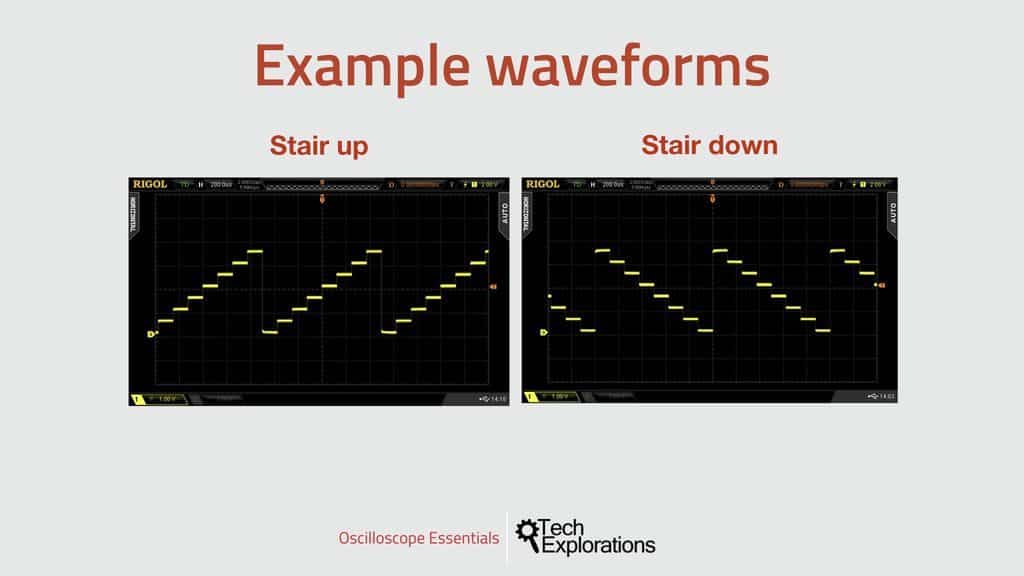 The stair waveform is a bit like the square waveform but instead of two levels, it has multiple. Like the ramp, we have stair waveforms that go up or down. In either case, the voltage level will switch to the very next level in the sequence.

In this slide I just want to show you some examples of the many other possible waveforms, and how they look in the oscilloscope. All of them are produced by the signal generator and are very rare in practice when you work with electronics, especially digital electronics (at least in my experience).

The one in the bottom right, the Quake waveform, depicts an actual earthquake. Your oscilloscope will be able to produce waveform is you connect appropriate probes that can detect earth tremors. Similarly, the second example in the bottom row, the Cardic waveform, is an actual waveform produced by the operation of a heart. Your oscilloscope can show your heart operation if you connect the appropriate probes .

Remember, any signal that changes over time, can be displayed by the oscilloscope. 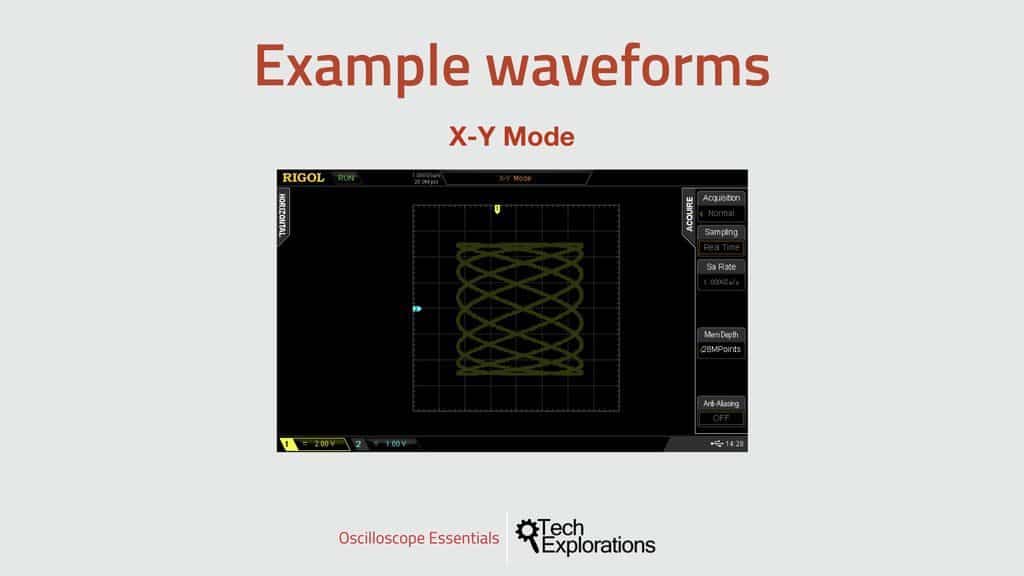 Most of the time, you will be working in Y-T (Y over time) mode. That is the mode that you will use to display the waveforms you saw in the previous slides.

Most oscilloscopes, however, are also capable to operate in X-Y mode.

In X-Y mode, the oscilloscope takes input from both channels and creates a graph that combines the two signals in two dimensions. The signal coming through the first channel is used to control the X axis, while the signal from the second channel controls the Y axis.

In normal Y-T mode, the signal from either channel is used to control what is displayed in the Y axis whereas time controls what happens in the X (horizontal) axis.

The resulting graph is often called “Lissajous figures”. You are looking at an example in this slide. Later in this course, I will show you how to create such a figure. 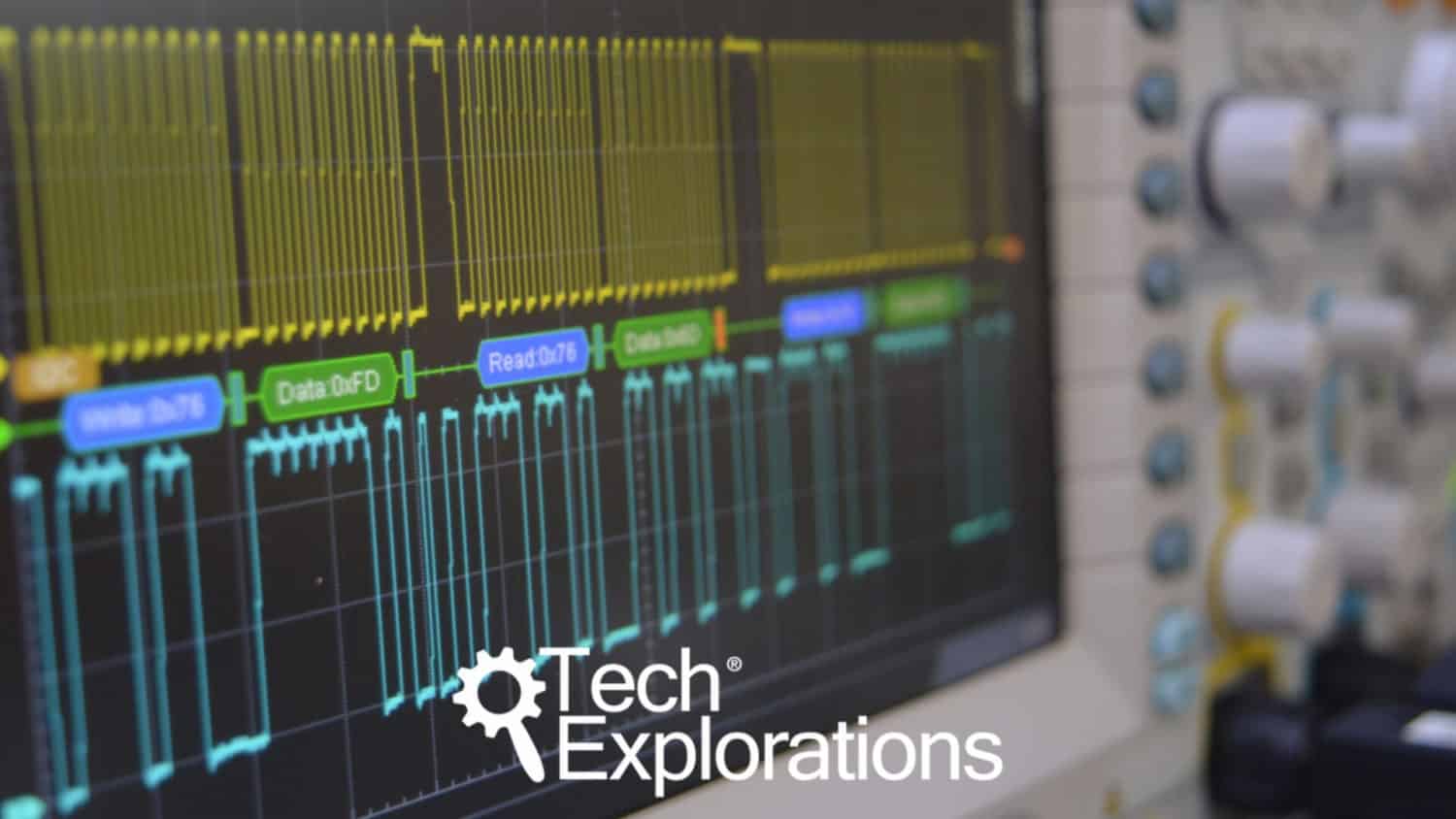 Demystify the oscilloscope and learn how to use it in your projects.

This course is perfect for people who have never used an oscilloscope.

Through a series of projects, this course will teach you how to use an oscilloscope to measure and decode signals in your electronics.