Project 2: DC motor speed and direction control with a potentiometer

In this project, you will learn how to control the speed and direction of spin of the DC motor's rotor. You will use a potentiometer to provide input to the Arduino, and the map() and analogWrite() functions in your sketch to make this work. 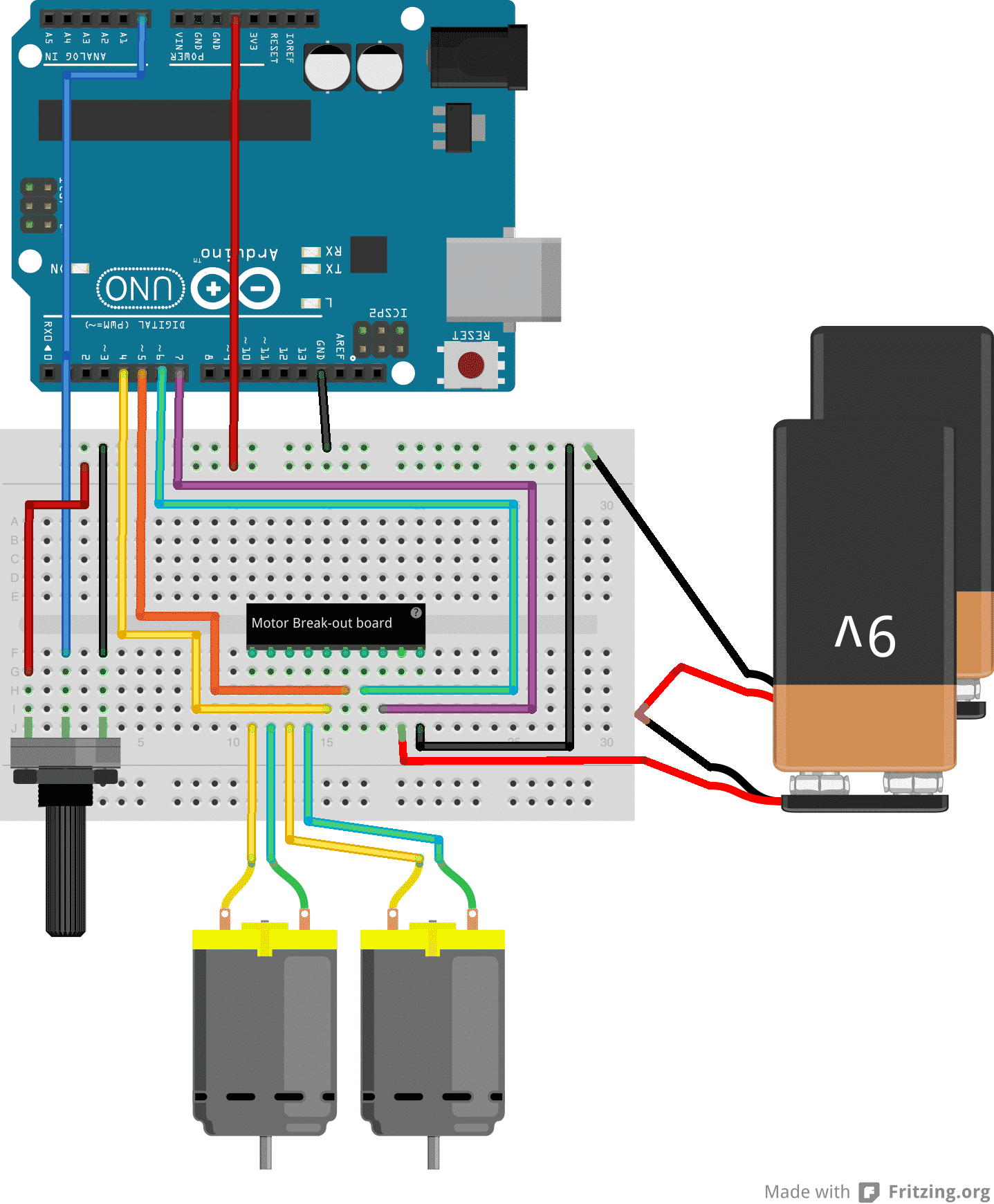 In Project 1 you learned how to control two DC motors with an Arduino Uno and an L298N motor driver. In this experiment you will take the next step. You will learn how to control the speed and the direction of the two motors. In the role of the user interfaceyou will use a 10 kΩ potentiometer.

You will use the potentiometer in two ways:

You will only need to add a 10kOhm potentiometer to the circuit of Project 1. To save you from jumping to the Project 1 page, I'm copying the full list of components here.

Let's do the wiring. You can add the potentiometer to the circuit from Project 1. I am copying here the complete instructions so that you don't have to jump back and forth between the two articles.

Start by unplugging the Arduino from your computer so that it is not in operation.

The only difference to the Project 1 circuit is the addition of the rotary potentiometer. It is connected to the 5V and GND columns on the breadboard, and to analog pin 0 on the Arduino. The 9V batteries depict the motor battery power supply. The black module in the middle of the breadboard depicts the L298N motor driver module with the connections as described earlier.

Sketch for Project 2, version 1: Control speed with a potentiometer

Here’s the first sketch for Project 2. This sketch allows the control of only the rotational speed of the two motors:

I have highlighted the changes and additions from the sketch in Project 1 in red.

Inside the move_motors() function, we map the potentiometer reading (which comes in the range of 0 to 1023) to a value between 0 and 255 (which is the range of valid values for the PWM pins), set the direction of rotation for the two motors using the digitalWrite functions, and set the speed using the PWM function analogWrite() to be mappedVal (which in turn is relevant to the value we set by turning the potentiometer).

Upload this sketch and turn the knob of the potentiometer back and forth. See how the speed of the motors change accordingly?

Sketch for Project 2, version 2: control speed and direction with a potentiometer

Schematically, this is what I would like to achieve: The red circle represents the potentiometer knob, and the black shows movement of the knob towards the left or the right.

We are only going to make an adjustment to the sketch to make this happen, no need to modify the circuit at all.

Here is the modified sketch:

I have highlighted in red the part of the sketch that has changed from the script in demo 2.

In the move_motors(int pot_value) function, potValue, the value read from analog pin 0 where the potentiometer is connected, is tested using the if function. If potValue is less than 512, then the first block is executed, if not then the second block is executed.

In block 1 and 2, the motor control functionality from demo 2 is repeated with the difference that now we now need to recognize that the potentiometer’s range of output values is divided to two parts. The first part, from 0 to 512, is used for moving the motors towards one direction, while the second one, 513 to 1023, moves the motors towards the other direction.

The only other difference between these two blocks is that in Block 1, a HIGH is written to M1 and M2, while in Block 2 we write a LOW, therefore spinning the motors towards the opposite direction.

Go ahead, try it.

If you are having any difficulty understanding what is going on in Blocks 1 and 2, experiment with the sketch. Try changing the map function values to something different.

For example, in Block 2, instead of

and upload the sketch.

What happens to the rotational speed of the motors?

Perhaps you could try this too:

Upload and compare to the previous two versions.

Can you notice any difference in behavior?

Can you explain any differences or similarities?

If you would like to learn how to use DC motors with your Arduino, consider enrolling to Arduino Step by Step Getting Serious.

We have a full section (Section 16) with 10 lectures dedicated to this topic.