Project 1: Control a servo motor with a potentiometer

Servo motors are used in applications where precision movement is required, such as in robotics. It is very easy to control one or more servo motors with the Arduino. Learn how with this article. 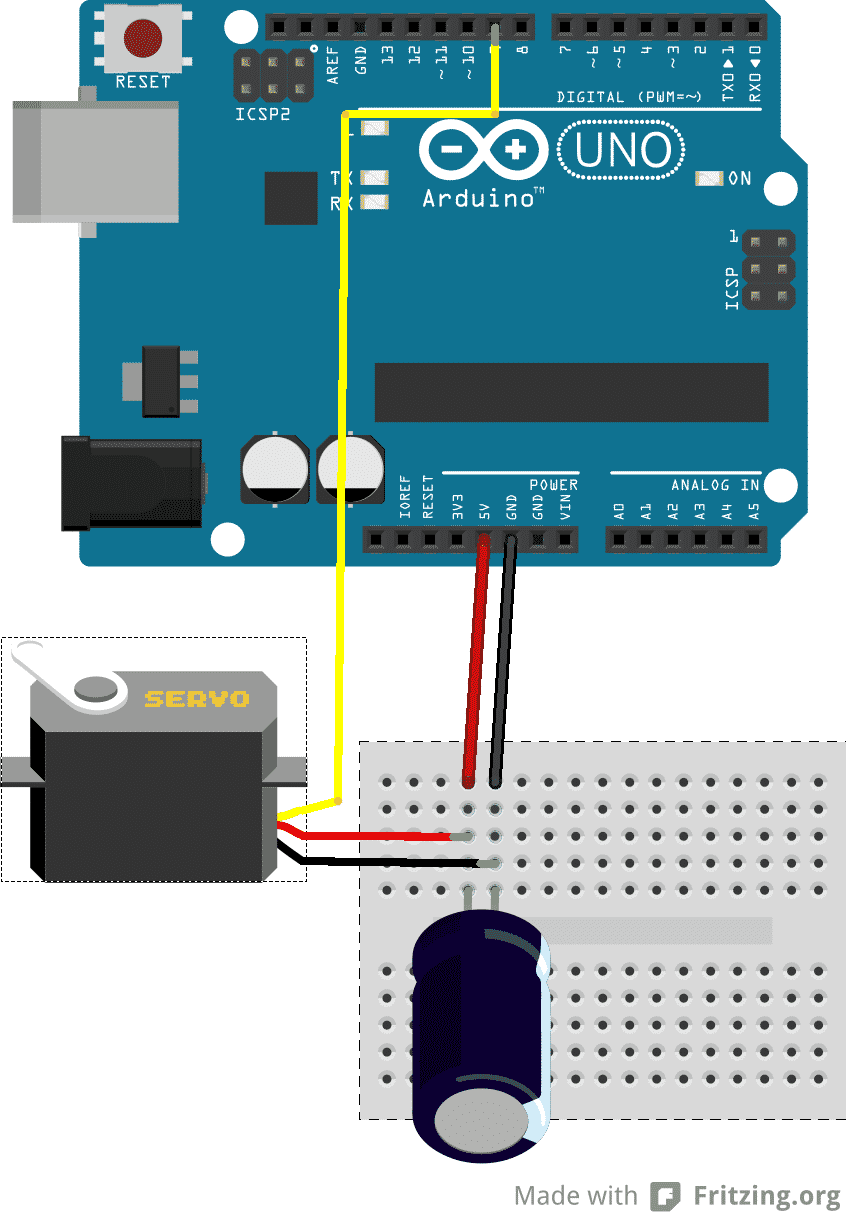 In other articles in the series (see here and here), you learned about the DC motor. The DC motor is a versatile, low-priced solution for providing motion to your projects. A “weakness” (or characteristic) of the plain vanilla DC motor is that when you apply voltage to its coil, it will spin as fast as its mechanics and load allows. Without additional electronics, we have no way of knowing or controlling the rotor position and speed.

This is not a problem for applications were continuous movement is needed, like for propelling a vehicle. However, it is a problem in application where precision is needed.

Imagine a robot that can perform surgery on humans. Some of you may work on something like this in the not so distant future. In such application, precision and control feedback is of paramount importance. You don’t just want to tell the motor to rotate its rotor by 90 degrees; you also want confirmation that it did. 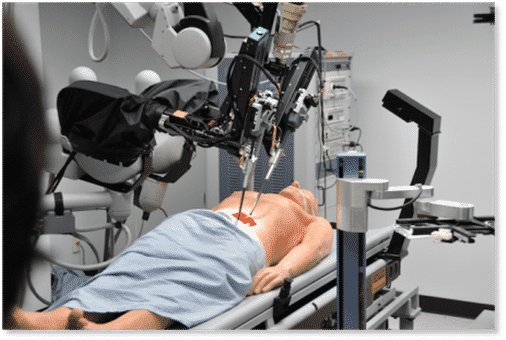 In a previous article in the series, I made a passing mention of the servo motor. The servo motor is an enhanced DC motor that includes circuitry for fine movement control and feedback.

In this and the next article, you will learn how to use a servo motor with your Arduino.

To make programming easy, you will use the servo motor library that comes standard with the Arduino IDE, as well as a third party library that adds a bunch of very useful capabilities.

Let’s go straight to the assembly and sketches.

In this project, you will use the servo motor library that comes with the Arduino IDE to start playing with your mini servo motor. Start by assembling the circuit. Then you will work on the sketch.

You will need the following components for this circuit:

This is what you are going to assemble:

There are a couple of things to notice here.

First, there is no motor break-out board like the one we used in the DC motor lecture. There, I wrote that because the Arduino cannot provide enough current for the motor, it is best to always use an external power source to power our motors. This is why you used the L298N motor controller module.

However, the mini servo motor that you are using in this circuit, is small enough to not stress the Arduino too much. Therefore, you can safely plug it straight into the Arduino in order to keep things simple.

Notice the big round tube at the lower part of the breadboard? That is a capacitor. Even though my servo motor is small, occasionally it may draw more power than what the Arduino can provide. This spike in power demands happens when the motor begins to move.

To assist the battery or other power supply to provide this additional power, you can use a small capacitor. Connect this capacitor between the GND and +5V pins of the motor. A capacitor works as store of energy, a bit like a battery that can charge and discharge very quickly.

When the servo motor starts, the capacitor will assist the main power supply by discharging, ensuring that the motor has all the power it needs.

A capacitor that is around 300μF or more is a good choice for a mini servo motor.

The motor itself has three wires coming out of it.

Usually, the red wire is for +5V, and black or brown for GND.

The yellow wire is for the signal.

Plug the signal wire to digital pin 9, the red to +5V and the black to GND.

You could try to control the servo motor through the Arduino digitalWrite() functions but that would require us figuring out the right values to write, and the timing for writing those values.

That’s too much work.

We are lucky, though, because with the Arduino IDE we get the Servo library, which contains functions that allow us to easily work with servo motors. First, we'll write the sketch using the Servo library.

// a maximum of eight servo objects can be created

// tell servo to go to position in variable 'pos'

// waits 15ms for the servo to reach the position

// tell servo to go to position in variable 'pos'

// waits 15ms for the servo to reach the position

This is one of the demo sketches that also come with the Arduino IDE. You can find it by clicking on File —> Examples —> Servo —> Sweep.

You first include the Servo library (“#include <Servo.h>”), and create the variable myservo that you can use as a handle to the Servo object (“Servo myservo;”).

In the setup function, you tell the Arduino that the control wire from our servo motor is attached to digital pin 9 (“myservo.attach(9);”).

The work is done in the loop() function, where you use the "for loop" to count from 0 to 180, and another one to count backwards, from 180 to 0. This has the effect of the rotor of the servo motor traveling 180 degrees to one side, and 180 degrees to the other side, 1 degree at a time, constantly.

Inside each for block, you first write a value to the motor using myservo.write(d), where “d” is a number representing the degree to which the shaft should turn. If we want to turn it by 15 degrees, we write myservo.write(15).

Finally, notice how you set a delay of 15 milliseconds inside each block, after a movement has been written? We need this because it takes a bit of time for the motor to move, and you want to make sure that any previous instruction has been completed before sending through the next move instruction.

That was easy but not satisfying enough. I want to be able to control the servo motor myself, instead of the Arduino being in charge.

How about you try to connect a potentiometer and use it as a controller for the motor?

Control the servo with a potentiometer

Let’s attach a rotary 10kΩ potentiometer, and adjust our sketch to enable us control of the motor by turning the knob. 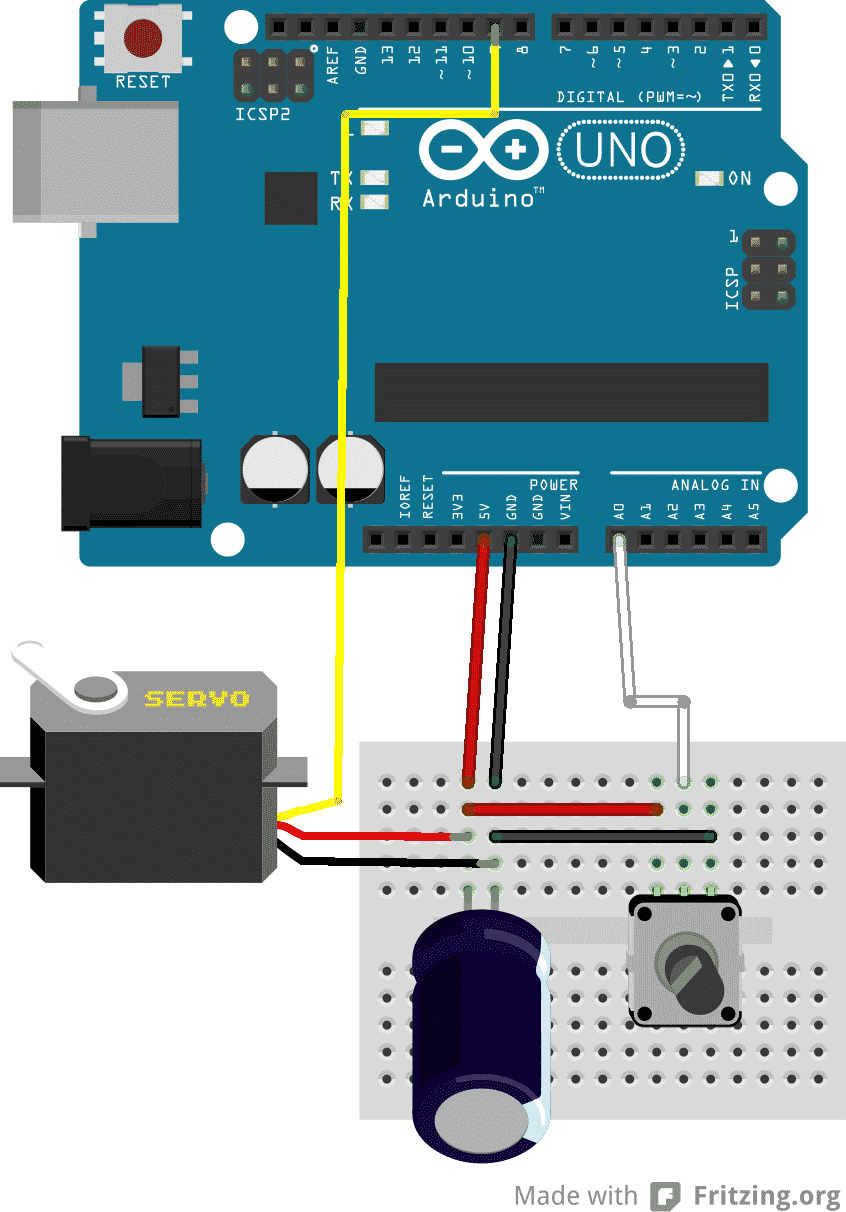 Connect the middle of the potentiometer pin to analog pin 0 (A0) on the Arduino. The other two pins connect to +5V and GND.

The new sketch looks is this:

// variable to read the value from the analog pin

// sets servo position according to the scaled value

// waits for the servo to get there

Just like in the first part of this project, you include the Servo library and set pin 9 as the servo pin.

In the loop() function, the Arduino constantly takes readings from analog pin 0 (A0) where the potentiometer is attached.

Because the range of values read in A0 is not the same as the values we can send to the servo, we use the map() function to scale appropriately.

Finally, we use the myservo.write(val); function to send the scaled value to the potentiometer.

If you would like to learn how to use servo motors with your Arduino, consider enrolling to Arduino Step by Step Getting Serious.

We have a full section (Section 17) with 10 lectures dedicated to this topic.