Acceleration is defined as the rate by which the velocity of an object changes. Having the ability to measure acceleration is very useful. For this purpose, we use an accelerometer. 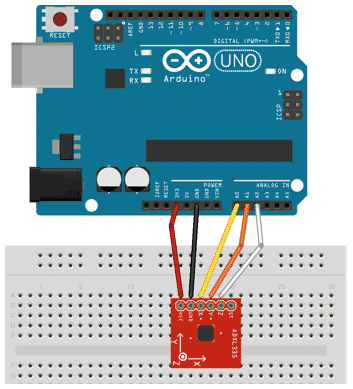 How can we measure acceleration?

Having the ability to measure acceleration is very useful. For this purpose, we use an accelerometer. An accelerometer measures the force that is applied to a small test mass. This test mass is placed inside the device and is held in place by one or more springs (or something equivalent). As gravity, or other forces, are applied on the test mass, they make it move towards a particular direction. The device measures the distance this mass travels from its resting position. The longer the distance, the stronger the force.

Imagine the accelerometer (or your self) in free fall, the test mass, as it is falling, is "feeling" no force being applied upon it. In a free-fall situation, the accelerometer would report no acceleration at all.

We use accelerometers in cars to detect collisions (and deploy airbags), or to gather performance statistics.

Accelerometers are embedded in smart phones to provide orientation information, and for making games that are played by moving a controller device.

You could use one in a toy car so that the car's wheels stop spinning if it has turned over, or to make toys that react to the movement of a controller in 3-D space.

Accelerometers are also part of Inertial Navigation Systems (INS) that help vehicles (ships, planes, cars, submarines etc.) maintain knowledge of their location when other positioning systems, like GPS, are not available.

In our experiment, we will use a common 3-axis accelerometer, the ADXL335. It is very cheap at around $7 on eBay, and very easy to connect to the Arduino through any of the analog pins. It reports acceleration in 3 dimensions, X, Y and Z. It is very robust as it can detect forces of up to 10,000 Gs (1 G is equivalent to the Earth's gravity at the surface). 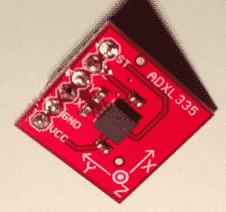 The sensor takes three acceleration measurements, X, Y, and Z. The Arduino reads the analog outputs 0, 1, and 2, acquires the measurements, and prints them to the monitor.

Also, be very mindful of the power limits of this device. It needs 3.3V input, not 5V! If you provide 5V you may actually damage it!

Done with the assembly, let work on the sketch now (here is the sketch on Github).

Lets see how it works. analogRead() reads the voltage present at one of the analog pins. The accelerometer outputs voltage to its three outputs relevant to the forces applied to it.

For example, at rest, the reading on the Z axis is around 410. If I push the device upwards, I apply force along the Z axis which makes the test weight inside the accelerometer "feel" heavier, and the voltage on the Z pin increases, causing the reading to increase (i.e. to ~470, in my experiment). If I push the device downwards, the opposite happens.

By taking and evaluating measurements in all three axis, you could make it possible for your device to know the precise direction of its movement and the force applied to it.

Learn more
Browse this article
How can we measure acceleration?
Accelerometers are everywhere
Assembly
Sketch