Measuring light with the Arduino is really easy. There are many sensors capable of detecting or measuring light, but the photo-resistor is one of the easiest to use. 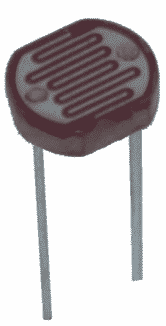 You can find these devices on eBay for less than $3 for a pack of ten. Think about what you can do with a device that can detect light. Of course, your gadget will be able to know if its day or night, or if the lights are on. So you could build a gadget that turns on a small light at the entrance of you home when it darkens, so you don't have to walk in the dark.

You could also use a photo-sensitive device to allow two gadgets to communicate with light; this is the principle behind the typical television remote control where the remote control and the television communicate using infrared light. You could also build a simple robot that follows a bright or dark line on the floor. Can you think of anything else you could do with a light sensor?

We'll now create a circuit that contains a photo-resistor, and we'll use an Arduino sketch to take light intensity readings from it. 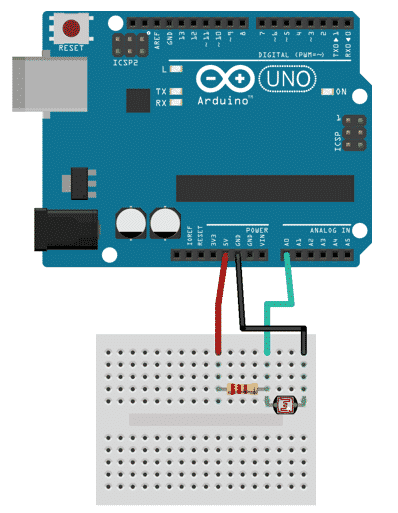 Notice how you connected the green cable in column 4, where the resistor and the photo-resistor meet? This type of wiring is called a "voltage divider" or "impedance divider", and its purpose is to create an output voltage that is a fraction of the input voltage to the divider. Look at the diagram (below): 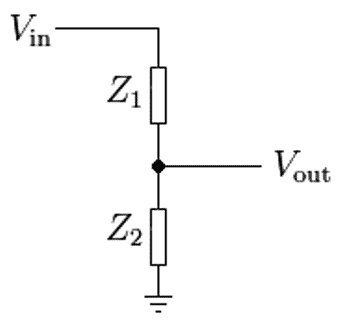 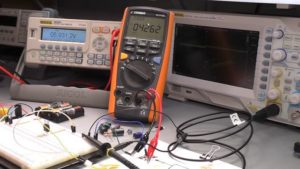 That's enough for now with the hardware. Let's look at the software.

Here's our program for this exercise (here is the sketch on Github):

Much of this sketch should be familiar to you now. There's setup(), loop(), and delay(), which we have seen before.

There's a couple of new things here. First, look in the setup() function. There is this statement:

This creates a serial connection which the Arduino can use to send text output to our terminal. This way the Arduino can "talk" to us. This terminal can be opened by clicking on Tools > Serial Monitor, and it looks like this: 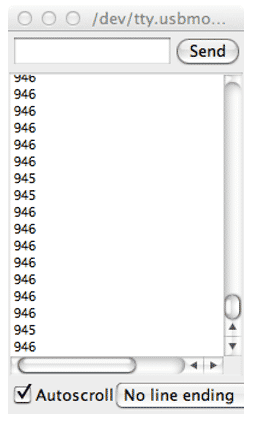 Next, have a look in the loop() function. In the first actual statement after the comment, we use the analogRead(A0) function to get a reading from socket A0 ("Analog 0") and store it to the local integer variable sensorValue. Easy, right?

We now have a value captured from the photo-resistor's voltage divider circuit, let's print it to the monitor so we can actually see it. Also easy, just do this:

This statement, says: "Go to the serial port, print line with content 'sensorValue'". The "ln" part of the println() function means that this particular function will create a new line after it prints out the text that is contained within the parentheses. You could use just Serial.print(sensorValue), but then the output would look like this:

The actual values will vary because of the differences in the components you used in your circuit compared to mine, and of course the lighting conditions in our two labs are probably different. But as long as you see similar values (above 0 and below 1024), then it worked!