Since KiCad first appeared in the PCB CAD world in 1992, it has gone through 6 major versions and evolved into a serious alternative to commercial products. I have been using KiCad almost daily since version 4 when I published the first edition of KiCad Like a Pro. 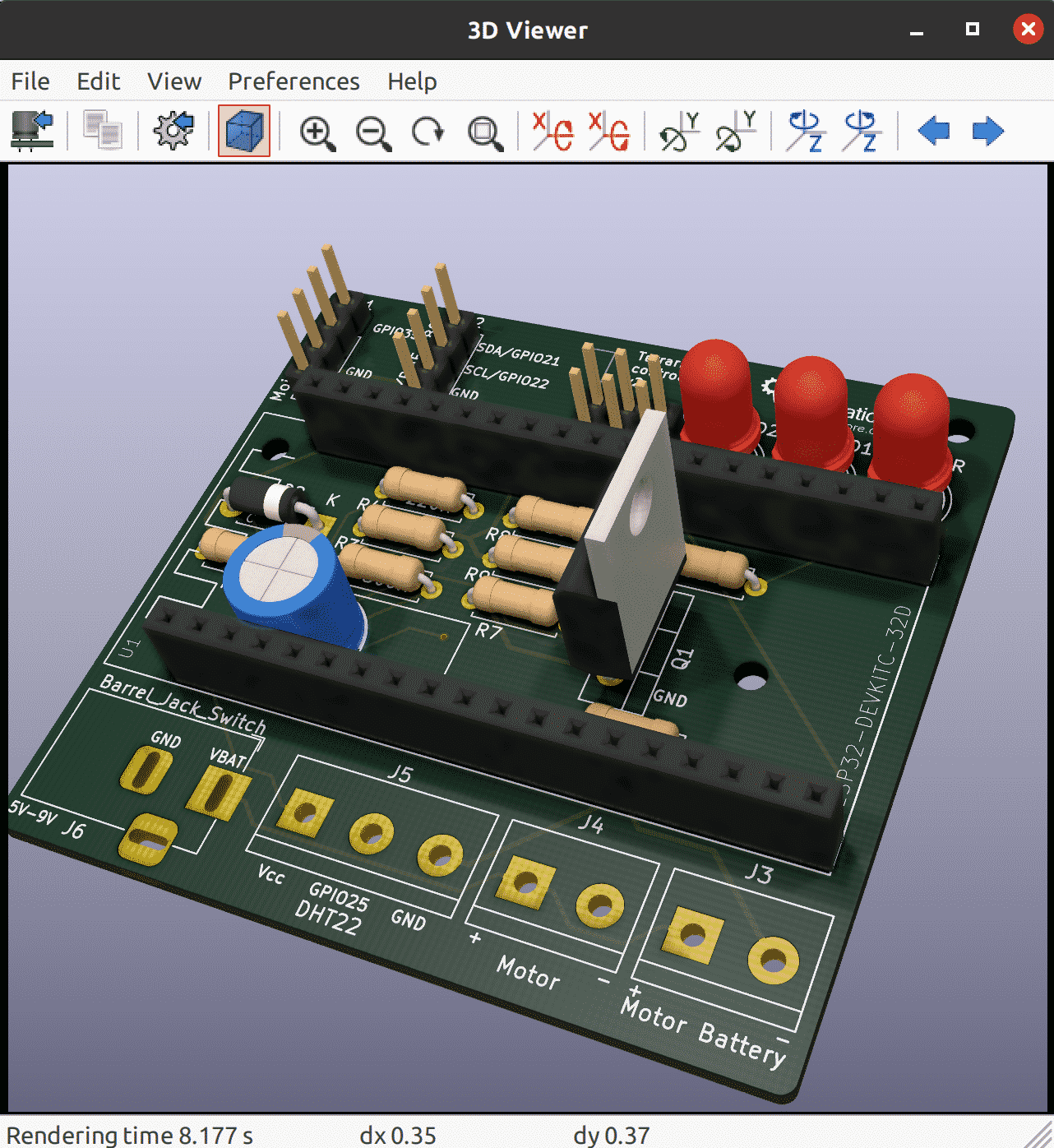 Once thought clunky and barely usable, it is now a solid, reliable CAD application. KiCad has been consistently closing the feature and performance gap against its commercial competitors. It has made leaps in adding powerful features and has significantly improved its stability.

Combined with the benefits of free and open-source software, I believe that KiCad is simply the best PCB CAD software for most use cases.

One of those benefits is KiCad's very active and growing community of users and contributors. KiCad has a dedicated developer team, supported by contributing organizations like CERN, the Raspberry Pi Foundation, Arduino LLC, and Digi-Key Electronics. The community is also active in contributing funds to cover development costs. Since joining the Linux Foundation, the KiCad project has received around $90,000 in donations. The project used this money to buy development time and funding developer conference travel and meetups. To a large extent, this alone guarantees that KiCad's development will accelerate and continue to in the future.

Supporting the KiCad core team is the KiCad community. The community consists of over 250 thousand people worldwide that have downloaded a copy. These people support the KiCad project in various ways: they write code, create and share libraries, and help others learn.

They write documentation, record videos, report bugs, and share hacks. During the KiCad 6 development cycle, the KiCad repository had around 14600 commits from the community. Based on this number, KiCad 6 is the most significant KiCad version ever in terms of changes.
Another signal of the strength of the KiCad community is that KiCad 6 includes completed or nearly completed translations to nearly 20 languages. No other CAD software that I am aware of can boast this.

PCB manufacturers have also taken notice. Many of them now publish KiCad-specific tutorials, explaining how to order your boards. Some have made it possible to upload the KiCad native layout file from your project instead of generating multiple Gerber files.
And finally, KiCad is part of an expanding CAD ecosystem. You will find KiCad-compatible component libraries on the Internet's major repositories, such as Snapeda and Octopart, as well as native support in PCB project version control software for teams, such as CADLAB.io.
KiCad's development and prospects have never been brighter than now. KiCad's roadmap has exciting new features and capabilities such as grouping board objects into reusable snippets and a stable Python API.

Why do I use KiCad? Because it is the perfect PCB software for my use case.
I am an electrical engineer with a background in electronics and computer engineering. But, above all, I am a technology educator and electronics hobbyist. The majority of my PCB projects eventually find themselves in my books and courses. My projects are very similar to those of other hobbyists in terms of complexity and size. I make things for my Arduino and Raspberry Pi courses. As a hobbyist, KiCad proved to be the perfect tool for me.

Your use case may be different. You may be a university student completing an engineering degree. You may be a hobbyist or solo developer working in a startup company. You may be part of a team working on commercial projects that involve highly integrated multi-layer PCBs.
To help you decide whether KiCad is right for you, I have compiled a list of 12 KiCad Benefits. This list contained ten items in the second edition of the book. I added the last two items to highlight additional benefits brought about with KiCad 6.

KiCad is open source. This is very important, especially as I spend more time creating new and more complicated boards. Open source, by definition, means that the code base of the application is available for anyone to download and compile on their computer. It is why Linux, Apache, and WordPress essentially run the Internet (all of them open-source). While I am not extreme in my choices between open source and closed source software, whenever a no-brainer open-source option does appear, like KiCad, I take it.

It is free! This is particularly important for hobbyists. CAD tools can be expensive. This is worsening with most CAD software companies switching to a subscription-based revenue model. When you are a hobbyist or student or bootstrapping for a startup, regular fees do add up. Not to mention that most of us would not be using even half of the features of commercial CAD software. It is hard to justify spending hundreds of dollars on PCB software when there is KiCad. This brings me to Benefit 3

KiCad is unlimited. There are no ''standard'', ''premium'' and ''platinum'' versions to choose from. It's a single download, and you get everything. While there are commercial PCB tools with free licensing for students or hobbyists, there are always restrictions on things like how many layers and how big your board can be, what you can do with your board once you have it, who can manufacture your board, and much more. And there is always the risk that the vendor may change the deal in the future where you may have to pay a fee to access your projects. I'll say again: KiCad is unlimited and forever! This is so important that I choose to pay a yearly donation to CERN that is higher than the cost of an Autodesk Eagle license to do my part in helping to maintain this.

KiCad has awesome features. Features such as interactive routing, length matching, multi-sheet schematics, configurable rules checker, and differential routing are professional-grade. While you may not need to use some of them right away, you will use them eventually. You can add new features through third-party add-ons. The external autorouter is one example. The ability to automate workflows and extend capabilities through Python scripts is another.

KiCad is continually improved. Especially since CERN & Society Foundation became involved in their current capacity, I have seen a very aggressive and successfully implemented roadmap. When I wrote the first version of this list (August 2018), KiCad 5 was about one month old. The funding for KiCad 6 was already complete, and the road map living document was published.  Three years later, KiCad 6 was delivered with promises fulfilled. Now, with KiCad 6 published, the road map for the future looks just as exciting.

KiCad's clear separation of schematics and layout is a bonus to learning and using it. Users of other PCB applications often find this confusing, but I believe that it is an advantage. Schematic design and layout design are indeed two different things. Schematic symbols can be associated with different footprints that depend on the project requirements. You can use the schematic editor independently of the layout editor or in sync. I often create schematic diagrams for my courses that I have no intention of converting into PCBs. I also often create multiple versions of a board using the same schematic. This separation of roles makes both scenarios easy.

I can make my boards anywhere: I can upload my project to any online fabricator that accepts the industry-standard Gerber files; I can upload it to an increasing number of fabricators that accept the native KiCad layout file; and, of course, I can make them at home using an etching kit.

KiCad works anywhere. Whether you are a Mac, Windows, or Linux person, you can use KiCad. I use it on all three platforms. I can take my KiCad 6 project from the Mac and continue working on Windows 10 without worrying about any software or project files glitches.

KiCad is very configurable. You can assign your favorite keyboard hotkeys and mapping, and together with the mouse customizations, you can fully adapt it to your preferences. With the additions of the plugin system and the Python API, , it will be possible to extend your instance of KiCad with the exact features you need (or write them).

If you are interested in creating analog circuits, you will be happy to know that KiCad ships with SPICE. You can draw the schematic in Eeschema and then simulate it in SPICE without leaving KiCad. This integration first appeared in KiCad 5, and it is now a stable feature.

In the past, KiCad's release cycle was somewhat chaotic. New major versions would come out every two or three years, but no one knew ahead of time. In the future, KiCad will operate in a yearly release cycle. This is good for two reasons: One, commercial users who can now better predict how the software they depend on will change and when. Two, as KiCad users, all of us will be able to expect a reliable development schedule that prioritizes reliability. KiCad is now mature enough to be able to evolve predictably.

KiCad is now a serious productivity tool for businesses. If you are an electronics engineer, you can proudly list it in your resume. If you are using it in your business, you can contract the KiCad Services Corporation, to customize the software to your exact requirements. I am talking about deep customization, not just changing the theme and the menu bars. This means that KiCad can fit precisely with your business. As far as I know, no commercial CAD application can do that. For the non-business users among us, we can expect many of these business-led improvements to flow into future software versions in the tradition of open-source software.

These are the twelve most important reasons I have chosen KiCad as my tool of choice for designing PCBs. These reasons might not be suitable for you, but I hope you will consider reading this book first before making your own decision.
I have been using KiCad since version 4. I have packed almost everything I have learned as a KiCad user in this book. I have organized it in a way that will make learning KiCad quick. The objective of this book is to make you productive by the time you complete the first project, in part four.

If you come from another PCB CAD tool and have experience designing PCBs, I only ask that you have an open mind. KiCad is most certainly very different from your current PCB tool. It looks different, and it behaves differently. It will be easier to learn it if you consciously put aside your expectations and look at KiCad like a beginner would. As per the Borg in Star Trek, ''resistance is futile”, and in learning, like in so many other aspects of life, you are better off if you go with the flow.