Boot into Raspbian for the first time

In this lesson you will boot up your Raspberry Pi for the first time, and connect to it using SSH.

If you have set its hostname, you will use that hostname to access the Raspberry Pi.

If you have not, no problem: I will show you how to determine the IP address that your router has assigned to your Raspberry Pi, and use that IP address to access it (again, via SSH).

I will be using a Raspberry Pi Zero W.

To boot your Raspberry Pi Zero W and operate it, apart from the Raspbian SD Card, you will need a USB power supply and a USB cable with a Micro Type B plug at one end, and the regular USB Type A plug at the other end. 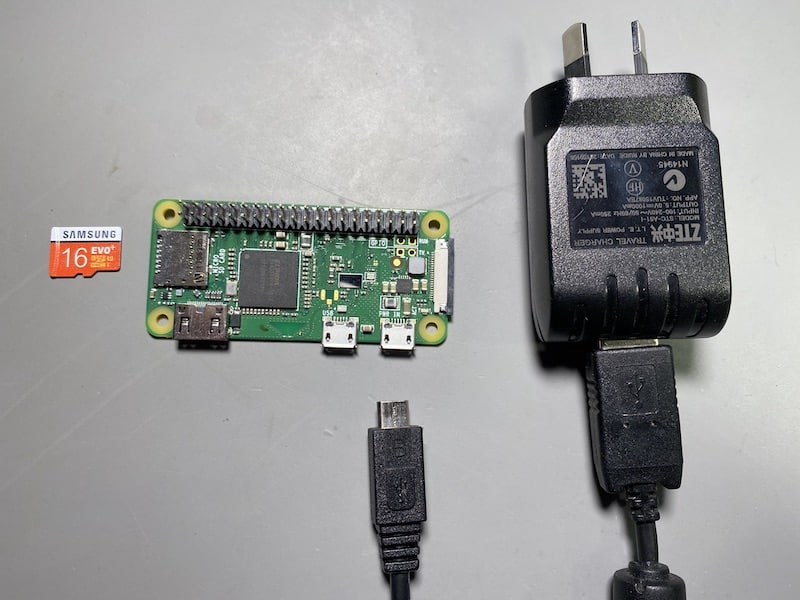 To operate your Raspberry Pi Zero W, apart from the Raspbian SD Card, you will need a USB power supply and a cable.

Insert the Raspbian SD card into the SD Card slot of the Raspberry Pi, and plug the USB power supply into the mains power socket. Then, plug the Micro USB connector into the USB port that is marked “PWR IN”.

In the photograph below, you can see my Raspberry Pi Zero W, powered by USB. The tiny green LED is showing disk activity by blinking irregularly as the computer is booting. 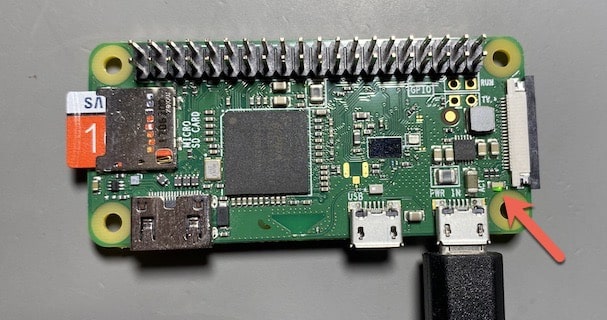 When you apply power to your Raspberry Pi, the green LED will blink irregularly to indicate disk activity.

Allow at least two minutes for your Raspberry Pi to boot and connect to your Wifi network. You will know that it is ready when the disk activity indicator (the green LED) stays on.

If you have set a hostname in the previous chapter, now is time to use it. Start your terminal emulator (such as iTerm or Terminal on Mac OS, and Putty or PowerShell on Windows), and issue this command:

Of course, replace “raspberrypi-zero.local” with the host name of your Raspberry Pi. The default password for user “pi” is “raspberry”.

Let’s break down this instruction:

In the screenshot below you can see an example of what to expect when you issue this command. 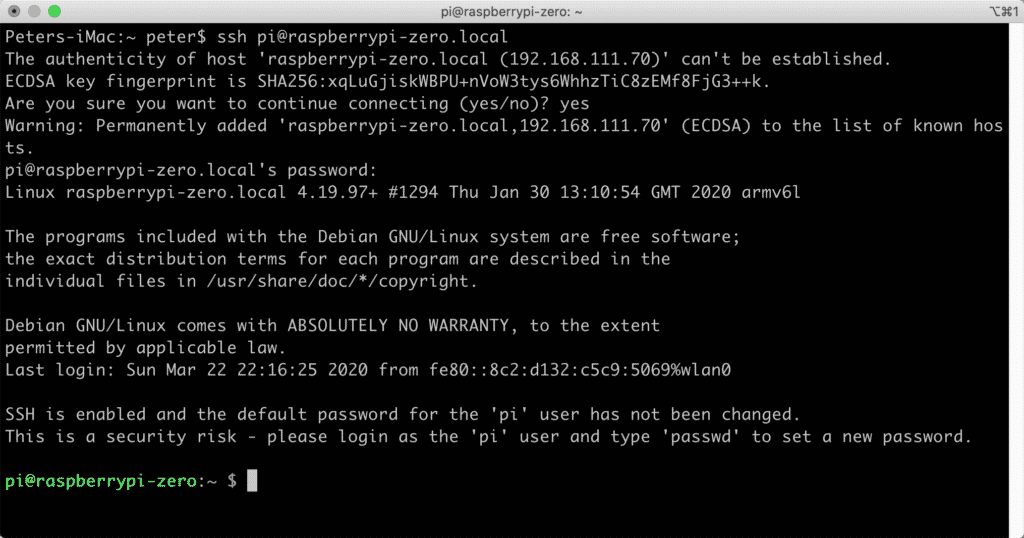 Connect to the Raspberry Pi using SSH and a terminal emulator.

Your SSH client will ask you to confirm that you want to connect to the new host because it has never seen its “fingerprint” before. Answer “yes”. Your computer will store your Raspberry Pi’s fingerprint and will not ask you again.

After this, SSH will ask you for the password for user “pi”. Type “raspberry”, and hit enter.
You’re in!

There are two ways to do this:

You can use a network scanner like “iNet Network Scanner” for Mac OS and the Advanced IP Scanner for Windows. Either utility will scan your network and make a list of all the hosts that it can find. One of those hosts will be your Raspberry Pi, and the scanner will give you its IP address.

In the screenshot below, you can see that my network scanner has found my Raspberry Pi, and is showing relevant information such as its hostname (which I set earlier), its IP address, and its MAC address. 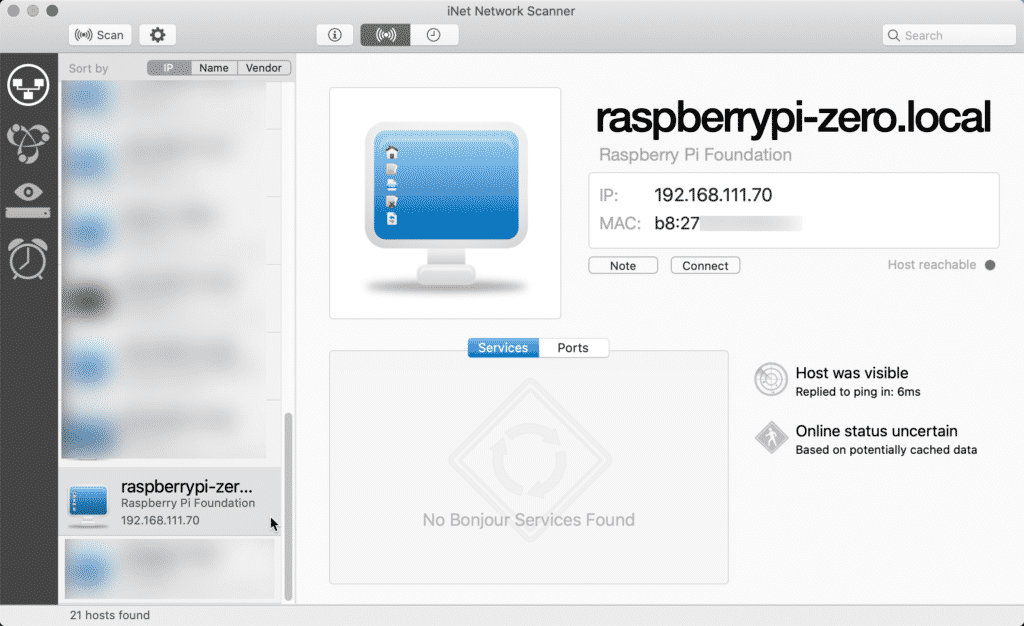 My network scanner has found my Raspberry Pi.

As you can see, the assigned IP address of my Raspberry Pi is 192.168.111.70. You can use the IP address instead of the hostname to connect via SSH:

An alternative to the network scanner is to look for the same information in your router’s DHCP table. You will need to login to your router’s admin panel, and look for the DHCP page, usually available under a diagnostics menu item. In the screenshot below you can see the DHCP table of my router, which gives the IP address of my Raspberry Pi. 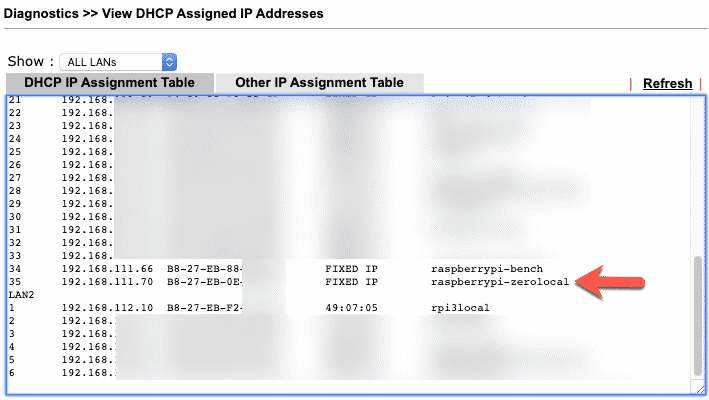 My router’s DHCP table show the IP address of my Raspberry Pi.

In the next lesson, I will show you how to set a fixed IP address for your Raspberry Pi, which is a good practice for any computer that offers services (such as a web server) to the network.